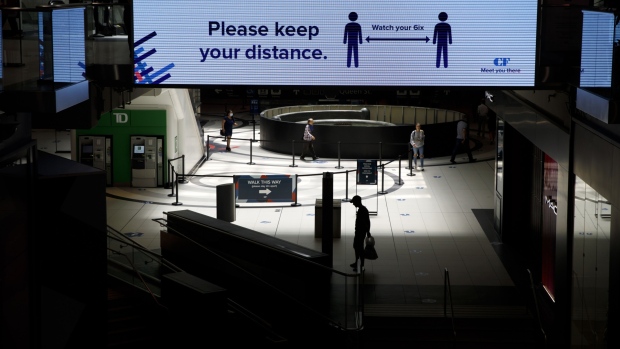 A social distancing sign is displayed inside the Eaton Centre in Toronto, Ontario, Canada, on Wednesday, June 24, 2020. Bloomberg/Cole Burston

Retail sales in Canada exceeded pre-COVIDlevels of spending in June as more shops reopened, however preliminary estimates from July suggest the momentum may have been short-lived.

Retailers sold 23.7 per cent more goods in the month versus May, Statistics Canada said Friday in Ottawa. That was in line with the median forecast in a Bloomberg survey, which called for a 24.5 per cent jump. Preliminary estimates from the agency showed receipts flagged in July, rising a measly 0.7 per cent.

Vehicles and parts, as well as clothing and accessories were the big gainers in June. Sales were up in all sub-sectors, and the total increase was almost triple the comparable figure in the U.S.

“We’re in a full aggregate recovery for retail sales, but the lost momentum in core sales might concern CAD,” Derek Holt, an economist at Bank of Nova Scotia, wrote in an email.

The strong report suggests Canadians unleashed their pent-up demand as soon as shops reopened. But the July flash estimate is concerning, and reinforces warning from economists that the pace of the recovery will slow in the second half of the year.

Still, signs of normality were evident in June, with sales 3.8 per cent higher than the same month a year earlier. All provinces except Ontario and British Columbia returned to February levels of retail sales, the last month before widespread lockdowns were imposed.