Retail sales cratered in April, but there’s some hope for the future

Canadian retail sales posted a historic drop in April from a full month of non-essential business closures and strict physical distancing measures, though sales rebounded in May based on preliminary data.

Receipts fell 26 per cent in April compared with the prior month, Statistics Canada said Friday in Ottawa. In the first two months of the lockdowns, sales declined by more than a third when combined with the 10 per cent drop in March.

May looks to have seen a significant rebound, with the agency’s flash estimate predicting a 19 per cent increase.

Alternative data like online job postings, mobility tracking and confidence surveys all suggest the economy is showing signs of life after plummeting in April at the height of the pandemic. That’s also in-line with the view from the Bank of Canada. Deputy Governor Larry Schembri said Thursday early signals suggest April was the low point for consumer spending.

Excluding auto vehicles and parts, retail sales were down 22 per cent in April on the month. They were down in every sub-sector for the first time in 27 years.

Economists in a Bloomberg survey had expected a 15 per cent drop in April. 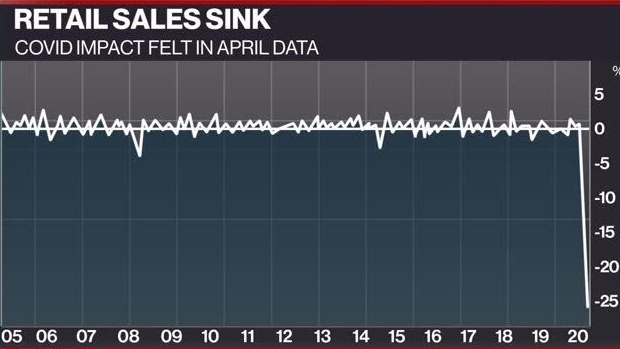