Canadian retail sales bounce back in May

Canadian retail sales have rebounded sharply after historic declines in March and April, with vendors making up almost all of their pandemic losses, Statistics Canada reported Tuesday.

Receipts rose 19 per cent in May, the agency said in its first full release for the month. June looks to have recorded another strong gain, with a flash estimate predicting another 25 per cent increase. That would bring sales last month to about 100 per cent of February levels, according to Bloomberg calculations.

The report confirms Canadian consumers are emerging from nationwide lockdowns with pent up demand and keen to spend. At issue is whether the sharp rebound will be sustained in coming months. Policy makers have warned a full rebound in consumer confidence could take years.

“At the moment, sales are still being buoyed by the enormous government income-support programs and consumers satisfying pent-up demand, both of which could fade in the second half of the year,” Royce Mendes, an economist at CIBC World Markets, said in a report to investors. 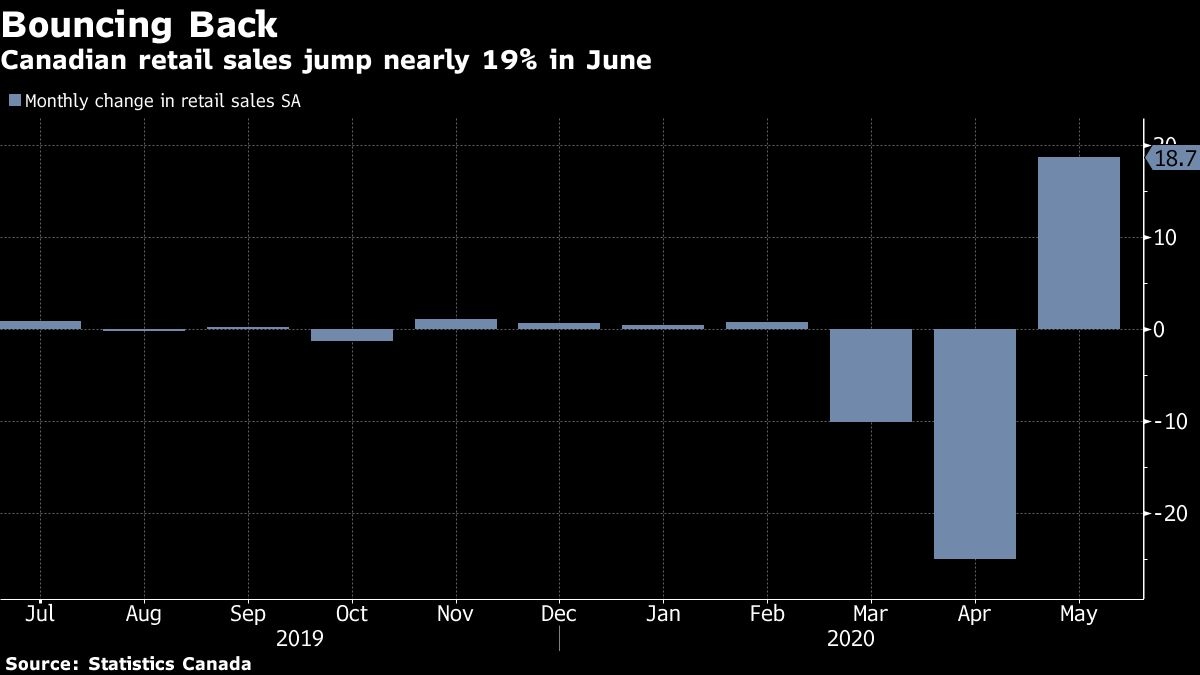 The retail numbers are consistent with alternative spending data tracked by Canadian banks, which have been showing consumers are eager to spend.

According to a report Tuesday by Toronto-Dominion Bank, consumer spending growth moved into positive territory in early July on an annual basis for the first time since the pandemic started. Three provinces -- British Columbia, Alberta, and Ontario -- have been driving the national improvement in consumption, the bank said.

“Re-openings have so far been by and large met with increased spending,” Brian DePratto, a senior economist at Toronto-Dominion, said in the report.

Still, economists caution that the pace of spending growth will slow with millions of Canadians still out of work and restrictions on some businesses likely to remain for some time.

Prime Minister Justin Trudeau is searching for a way to shift citizens from a $2000 a month benefit fund back into the workforce. The $80 billion Canada Emergency Response Benefit runs until Oct. 3.

“CERB payments have recently been extended by Ottawa but they will eventually end. Barring a massive rebound in employment, this will squeeze household income and weigh on retail sales later this year,” Jocelyn Paquet, an economist at National Bank Financial in Montreal, wrote in a report to investors.

Retail sales in May were up in nearly all sub-sectors except food and beverage stores, which had already posted a record increase in March. The gain in sales coincided with the reopening of many brick and mortar retailers across the country after emerging from pandemic shutdowns.

Auto sales led gains, jumping 66 per cent. Excluding this sector, retail sales were up 10.6 per cent on the month. Economists in a Bloomberg survey had expected a 20 per cent gain in May sales, and a 12 per cent increase excluding autos. The statistics agency didn’t provide industry-specific estimates for June.

Even with the increase in May and June, the second quarter will go into the books as among the worst ever for Canadian retailers. Based on the June flash estimate, quarterly sales were down 15 per cent in the three months from the prior period, according to Bloomberg calculations.