If this Omicron wave is short-lived, then the BoC could still raise rates mid-2022: Economist

Canadian retail sales surged for a second consecutive month in November, as consumers continue to lead the nation’s recovery.

Retailers sold 1.2 per cent more goods in November, according to a preliminary estimate released Tuesday by Statistics Canada. That’s on top of a 1.6 per cent gain in October on strong auto sales, stronger than the 1 per cent increase for the month initially forecast by the statistics agency. 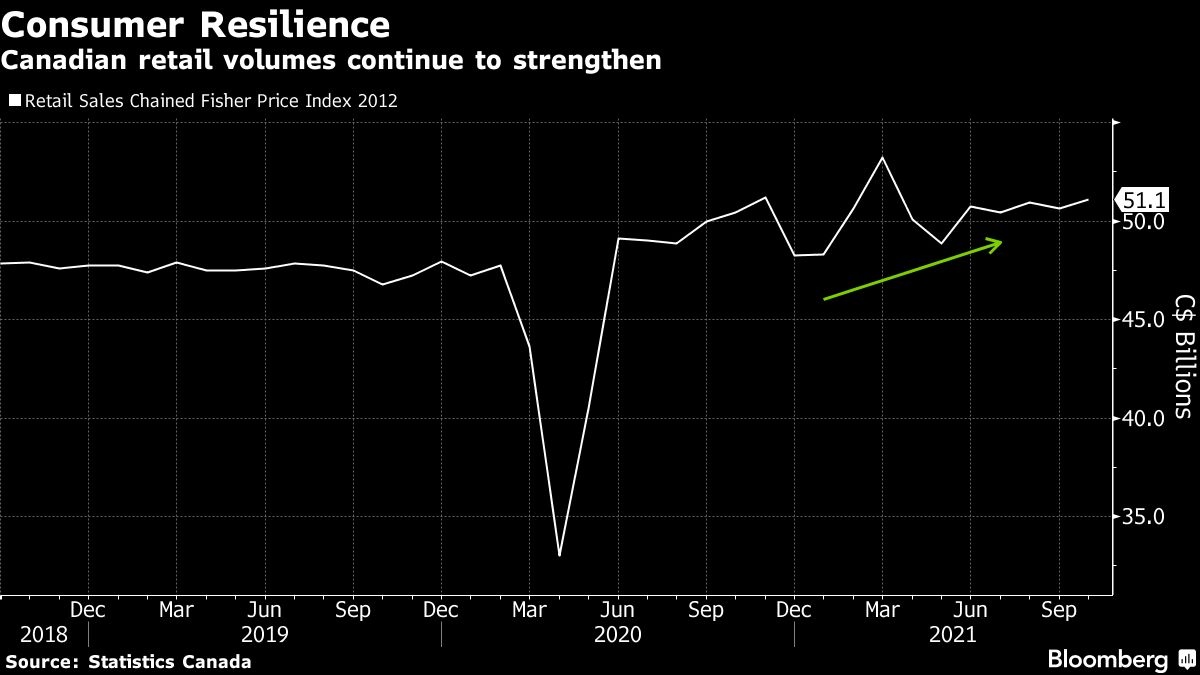 The numbers underscore how consumers -- flush with cash after holding back purchases for much of the past two years -- are ready to spend and leading growth in the second half of this year. Data released late last month showed that consumer spending jumped by an annualized 18 per cent in the three months that ended in September, the second biggest increase going back to the early 1960s.

The data may also bolster confidence that the economy is adapting to global supply-chain problems, finding ways to get around shipping port closures and microchip shortages.

“Today’s October and advance November data show that the economy probably had more momentum than we previously thought at the end of last month,” Andrew Grantham, an economist at Canadian Imperial Bank of Commerce, wrote Tuesday in a note to clients. “However, the outlook for the economy has of course taken a turn for the worse recently, given the rise in omicron cases and re-tightening of some restrictions across the country.”

The spread of the omicron variant has prompted some regions of the country, most notably Quebec, to reimpose measures to curb the virus such as closing down gyms and bars. This could dent consumer confidence and move shopping online again.

The gain in October was led by higher auto sales, as supply-chain disruptions were less pronounced in the month, according to the report. Sales were up in 7 of 11 categories tracked by the agency.