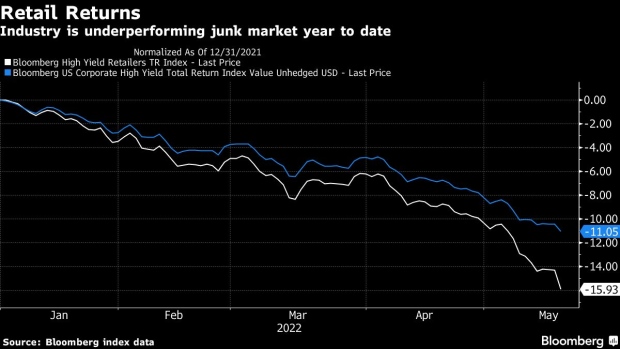 (Bloomberg) -- Retailers have gotten smacked in the US stock market this week amid worrisome earnings reports from Walmart Inc. and Target Corp. -- and the pain is spreading to the industry’s bonds.

Macy’s Inc.’s notes maturing in 2029 and 2030 hit record low prices below 87 cents on the dollar on Thursday, according to Trace. Bath & Body Works Inc.’s unsecured bonds dropped after the company cut its earnings outlook. Neiman Marcus, which traded at par as recently as May 4, saw its 2026 bonds slip below 95 cents.

Bonds tend to hold up better than stocks during market routs, so the decline is potentially a bad sign and could signal investors are starting to get worried interest payments will be harder to make amid an economic slowdown. Retailers are grappling with escalating costs amid spiking inflation.

Walmart and Target both generated an enormous amount of concern about retailing this week. Both saw their stocks post the biggest one-day drops since October 1987 after they warned about a spending slowdown.

Soaring inflation has put pressure on retailers who are holding at least 20% more inventory than they have on average over the past three years, according to Bloomberg Intelligence analyst Mike Campellone, citing it as a “risk to profitability if consumer demand wanes.” Inventory is likely to swell more after earnings finish, he added.

“High inflation and labor costs add to this risk, and could negatively affect the credit metrics of investment grade and high-yield retailers,” he wrote in a note earlier this month.

Retail bonds are the worst performing sector in high-yield so far this year. The industry has collectively plunged 16% on a total return basis, according to data compiled by Bloomberg. That compares to an 11% loss for the overall Bloomberg high yield index.