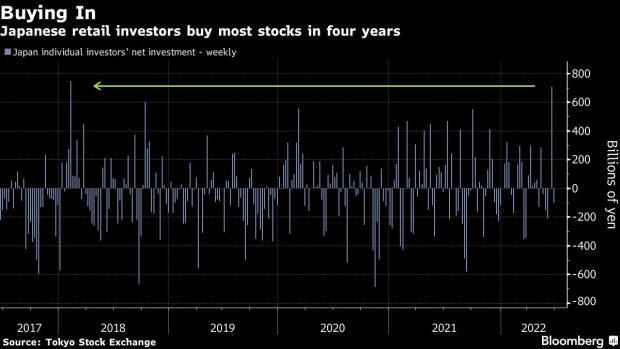 A pedestrian using his smartphone walks past an electronic stock board outside a securities firm in Tokyo, Japan, on Thursday, Aug. 30, 2018. Japan's Topix index closed lower after fluctuating as investors assessed trade frictions and geopolitical risks. Photographer: Kiyoshi Ota/Bloomberg , Bloomberg

(Bloomberg) -- An increasing number of Japanese companies are offering gifts to retail investors in an effort to expand their shareholder base.

As many as 56 companies have set up so-called shareholder benefit programs since October, up 33% from the total for the 12 months ending in September, according to Daiwa Investor Relations Co. in Tokyo. The number of firms which established similar schemes each year had fallen since peaking at 106 in 2018.

More than a third of the some 3,800 firms listed on the Tokyo Stock Exchange already have such programs, which offer retail investors items ranging from gift certificates to products, according to Daiwa Investor. Companies tend to announce the programs in February before the fiscal year ends on March 31 and ahead of general shareholder meetings in May, it added.

“While the number of shareholders can increase at a relatively high rate after the program starts, it tends to decline when the special benefits run out,” said Masami Hamaguchi, a managing director at Daiwa Investor. Although the quantity of shares held per individual investor is not large, “it works in the direction of increasing stock ratio liquidity,” she said.

Adding retail investors can help provide support for a company’s stock in a market that’s seen renewed pressure from a hawkish Federal Reserve and volatility from the yen’s 16% slump against the dollar this year. During the third week of June, individual investors completed the biggest net purchase of Japanese shares in over four years just as foreign funds were pulling out, data from the Tokyo Stock Exchange showed.

Still, some investors are less enthusiastic about the practice for its short-term focus and lack of substance. Last year in August, shares of Demae-Can Co. tumbled after the food delivery service provider decided to scrap a shareholder-benefit program of handing out vouchers.