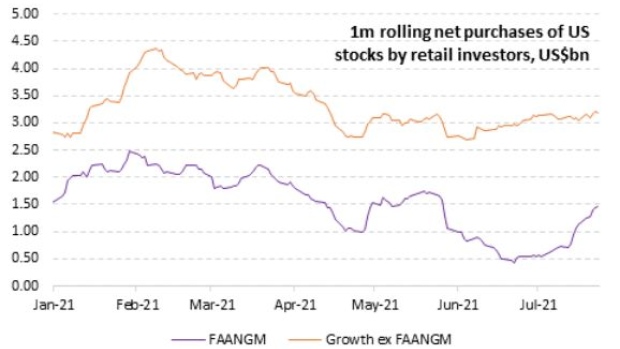 (Bloomberg) -- Individual investors are piling into the likes of Apple Inc. and Microsoft Corp., showing a new appetite for megacap stocks after a rush of earnings sent some of the biggest tech names slumping.

The reversal of retail investors, who broadly rotated out of so-called Faang stocks in June before returning in July, helped power the S&P 500 and the tech-heavy Nasdaq 100 to record highs earlier this week even as concerns about the delta variant and inflation dominated earnings calls. Both indexes retreated Friday, but remain near all-time highs.

Amateur investors have bought roughly $1.2 billion of Apple stock over this month, according to data from Vanda Research, a firm that tracks retail-trading flows in the U.S. Retail buyers have also boosted bets on a trio of exchange-traded funds tied to the S&P 500 and the Nasdaq 100 to the tune of $4.2 billion. They invested $527 million in shares of the megacap companies this week alone, with only Netflix Inc. seeing more selling than buying.

The return of individual buyers comes after a week of crucial earnings for U.S. megacap stocks with Apple, Microsoft, Facebook Inc., Alphabet Inc. and Amazon.com Inc. reporting in the span of a few days. The results were mixed, with all except Alphabet falling after their reports. Amazon slumped as much as 8.1% on Friday, the most intraday since May 2020.

Retail investors were quick to buy the Nasdaq 100’s dip on Tuesday when the index fell 1.1% for its worst day in more than two months, Vanda Research data show.

Individual investors pushed $139 million into the Invesco QQQ Trust Series 1 (ticker QQQ) as the ETF tumbled, along with $79 million into the more volatile ProShares UltraPro QQQ (ticker TQQQ) that day, the most in at least six months.

“Retail have been big buyers of market dips over the summer months,” Viraj Patel, global macro strategist at Vanda Research, said in an email. “It’s only when we get major crises like last March that we see liquidation by retail investors as well.”

The view from individual investors clashes with that of hedge funds, which have bet against Nasdaq 100 futures for the longest stretch since the financial crisis.

Moreover, retail investors have also continued to put smaller amounts of cash into more speculative corners of the market like Bitcoin play Bit Digital Inc. or cult-favorite AMC Entertainment Holdings Inc. Bit Digital saw the 10th highest inflow of cash on Wednesday, according to Vanda Research, while AMC Entertainment has reaped roughly $585 million in flows over the past month.