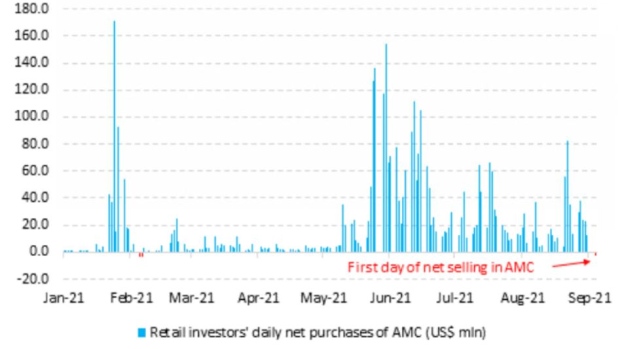 (Bloomberg) -- AMC Entertainment Holdings Inc.’s cult-like following of amateur investors took advantage of gains after a record Labor Day to sell shares on a net basis for the first time in seven months.

Retail investors sold $2.45 million in shares of the world’s largest movie-theater company on Tuesday, marking the first time the group became sellers of the stock since February, according to data compiled by Vanda Research. That reversal, despite its rising share price yesterday, is the latest example that Wall Street pros are stepping in to more-speculative pockets of the market.

AMC shares slumped 4.3% on Wednesday after rallying 8.7% to close at a two-month high on Tuesday. The rally came after the theater chain said about 2 million people in the U.S. watched movies at AMC between Thursday and Sunday -- an admissions-revenue record for the holiday weekend.

The fact some of AMC’s die-hard fans, many who have touted bets on AMC shares to “go to the moon,” appear to be taking advantage of the recent gains and fundamental news may be a signal of what’s to come. Retail investors bought less than $250 million of stocks in the latest rally that began in August, Vanda data show. That’s a far cry from the more than $1 billion in weekly purchases that was seen when meme mania was running rampant in January and June, said the firm, which tracks retail investment flows in the U.S.

“Many hedge funds are now trying to anticipate changes in retail sentiment and buy these stocks before mom and pop investors get involved,” Vanda’s Ben Onatibia and Giacomo Pierantoni wrote in a note. The pair said the only sector drawing retail investor appetite appeared to be Chinese ADRs.

AMC remains up more than 2,000% this year and carries a market value of about $23.8 billion, larger than companies like Hormel Foods Corp. and Caesars Entertainment Inc.