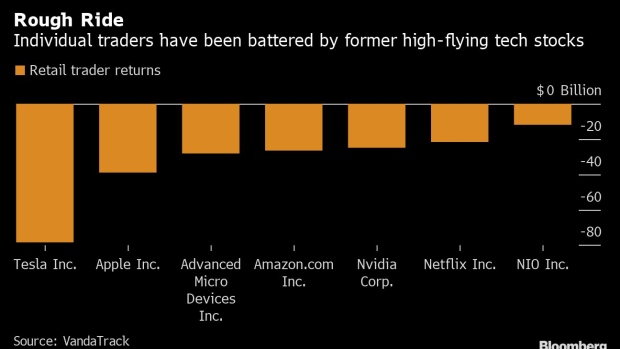 (Bloomberg) -- Investment portfolios belonging to retail traders suffered a $350 billion blow this year as big bets on risky stocks and former high-fliers like Tesla Inc. backfired for the mom-and-pop set.

The average active amateur investor’s portfolio is down about 30% in 2022, according to data compiled by Vanda Research, which studies self-directed retail traders globally. By contrast, the S&P 500 Index has lost 17%.

Of course, this group isn’t about the boring S&P 500. It tends to be concentrated in high-profile stocks like Elon Musk’s electric-vehicle company, which wiped out about $78 billion for retail traders alone as its shares plunged, according to Vanda.

Individual investors have had an outsize influence on the market since the start of pandemic lockdowns, when cooped-up 20- and 30-somethings flocked to no-cost trading to relieve boredom and make an easy buck buying almost any stock during a bull-market boom. Now, as equities head toward their worst year since the 2008 financial crisis, retail traders have suffered even sharper drops and their share of US equity market volume has slipped since the start of 2021.

“The losses this year were unprecedented, especially for the younger generation of investors,” said Giacomo Pierantoni, the head of data at Vanda in Singapore. Whether they keep plowing money into the market — buying the dip, as they say — or lose faith in investing and give up altogether could help determine their ability to retire in the coming decades.

Another sharp selloff for Tesla, which accounts for about 10% of the average self-directed global retail trader’s portfolio, or Apple Inc. could determine sentiment, according to Pierantoni.

Retail-trader portfolios have also seen big losses from chipmakers Advanced Micro Devices Inc. and Nvidia Corp., each of which are down more than 40% this year. Those who concentrated investments in index-tracking exchange-traded funds like the SPDR S&P 500 ETF Trust and the tech-heavy Invesco QQQ Trust Series 1, which follows the Nasdaq 100 Index, suffered too as major averages head to their worst years in more than a decade.

That said, there are signs that some retail investors took fairly defensive positions that paid off this year. Their portfolios were overweight energy companies like Chevron Corp. and Enphase Energy Inc. and drugmakers including AbbVie Inc., which broadly outperformed the broader markets.

“Investors have learned to be a little more nimble in this environment,” said Callie Cox, an investment analyst at eToro Group Ltd. “When everything isn’t going up, you need to be more strategic.”

Of course, that 30% average drop estimated by Vanda speaks to how difficult it actually is to be nimble in a collapsing market. JPMorgan Chase & Co. is even more pessimistic about the performance of retail traders, estimating they suffered losses of 38% this year.

For individuals who also dabbled in the cryptocurrency market or digital assets like non-fungible tokens, the losses are likely even uglier. Bitcoin is down 64% this year, while the Bloomberg Galaxy Crypto Index, a basket of different tokens, has erased two-thirds of its value.

One of the strangest phenomenons to emerge from the retail trader frenzy during the most severe pandemic lockdowns were so-called meme stocks that became popular on internet chat boards. A group of 37 meme stocks tracked by Bloomberg has tumbled 38% this year.

Of those stocks, 11 have crashed more than 70%, with companies like Newegg Commerce Inc. and Bed Bath & Beyond Inc. seeing some of the worst drops, data compiled by Bloomberg show. GameStop Corp., which helped spark the meme movement, has erased one-third of its value in 2022, while AMC Entertainment Holdings Inc., another meme poster-child, is down 64%.

“Going forward, investors will take this year as a lesson learned and will become more sophisticated,” Cox said. “Retail traders will probably stick in this longer than people expected because the traders that have been hit really, really hard this year are younger investors with higher risk tolerance.”

--With assistance from Denitsa Tsekova.