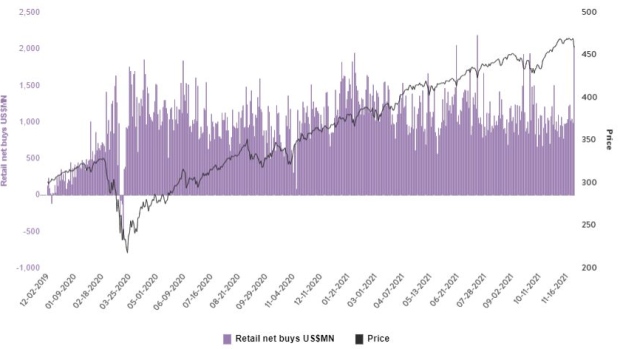 Alex Greenfield, a 48-year-old screenwriter and new space investor, checks his space investments on a mobile device in Mount Snow, Vermont, U.S., on Tuesday, July 6, 2021. Now more than ever, space-themed ETFs, startups and new trading technology are making it easy for people to bet on the future of the extraterrestrial economy. Photographer: John Tully/Bloomberg , Bloomberg

(Bloomberg) -- Retail investors were quick to plow cash into the biggest U.S. exchange-traded funds and industries like airlines and travel stocks when the market was hammered on Friday.

The day-trading crowd snapped up roughly $2 billion in assets like the SPDR S&P 500 ETF Trust (ticker SPY) and Invesco QQQ Trust Series 1 (ticker QQQ) on Friday as the buy-the-dip crowd stepped in where Wall Street didn’t, according to data from Vanda Research, a firm that tracks retail-trading flows in the U.S.

Individual investors showed conviction not only buying ETFs that track the major U.S. averages, but bought airline stocks like Delta Air Lines Inc., United Airlines Holdings Inc., as well as cruise operator Carnival Corp., Vanda data show. The trio were among the 10 most-bought stocks on Friday with each seeing at least $39 million in buying, according to the data.

The buying came as Wall Street broadly dumped shares amid concerns related to the omicron Covid variant. Friday marked the third largest day of net retail buying since the pandemic began with non-tech single stocks seeing the largest inflows, according to Vanda data.

With the buying skewing toward airline and reopening stocks, “animal spirits are clearly still alive in this cohort of investors,” according to Eric Liu, the co-founder of Vanda Research. “Friday’s session was mostly about shooting first and asking questions later,” he said.

The buy-the-dip trade was playing out well for retail investors on Monday as stocks climbed as a relative sense of calm returned to global markets. The S&P 500 Index rose 1% at 10:10 a.m. in New York as the tech-heavy Nasdaq 100 rallied 1.5%.

The jump in retail trader buying was apparent on Fidelity’s platform where Apple Inc., Boeing Co. and Nvidia Corp. were the most purchased stocks on Friday. Buying for stocks that would benefit from a reopened economy far outpaced the number of sell orders, according to data provided by the brokerage.

Liu expects retail and systematic investors will continue to drive the initial moves in stocks while institutional stock pickers take a wait and see approach.