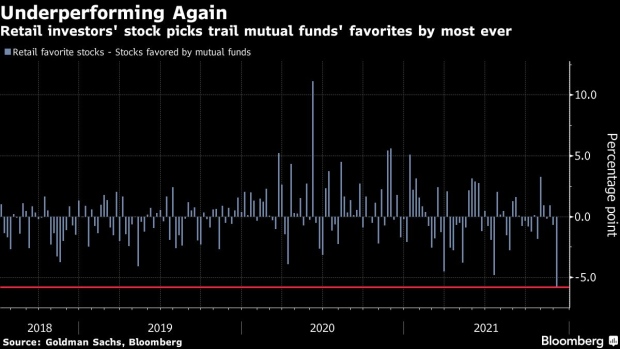 (Bloomberg) -- Individual investors, who reaped eye-popping returns that made some pros chuckle earlier this year, are facing a moment of reckoning.

The obsession with risk-on assets -- short-handed by the term YOLO for “you only live once” -- was a blessing for amateur traders during the meme-stock craze. Well, it’s since turned into a curse as the going got rough in every nook of the stock market last week. A basket of the 50 most-popular stocks among individual investors plunged 7.8% last week, trailing companies most-favored by mutual funds by 5.8 percentage points, the most ever, data compiled by Goldman Sachs Group Inc. show.

The retail crowd, who were among the first to scoop up shares during the 2020 pandemic rout, appear now to be leaving the YOLO mentality behind. Last week, the daily average premium that small-lot traders -- those buying or selling 10 options contracts or less -- shelled out for protection jumped to about $786 million, surpassing a January peak for the highest level in recent history, Options Clearing Corp. data analyzed by Susquehanna International Group show.

“While the small-lot call premiums continue to outpace those put premiums in absolute terms, we can see that they are trending in different directions,” said Chris Jacobson, a strategist at Susquehanna. That’s “suggesting that retail activity on the put side is in fact ramping up alongside the market weakness.”

Retail investors, one of the bull market’s most reliable dip buyers since the pandemic rout, are seeing their nerves raked as the Federal Reserve’s hawkish pivot and rising infection cases are hammering the more-speculative corners of the market the most. Individual investors incurred several big losses last week, from Plug Power Inc., which plunged 17%, Beyond Meat Inc., which lost 16%, and Tesla Inc., which shed 6.2%.

Evidence that retail traders, whose willingness to stand firm amid prior turmoils turned heads and caused admiration, are now showing little appetite for risk, is adding up. SPACs are taking a drubbing. Bitcoin is down more than 28% from its peak. Off-exchange volume has dropped to near the lowest level since last year’s rout. A gauge of newly minted initial public offerings, measured by the Renaissance IPO exchange-traded fund, lost 11% last week.