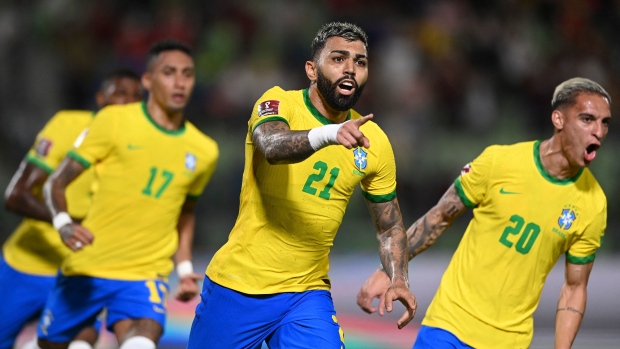 (Bloomberg) -- When Brazil’s national squad enters the Lusail Stadium in Qatar on Thursday for its first match in this year’s World Cup, Roberto Fulcherberguer will be watching more closely than most.

As the chief executive officer of Brazilian retailer Via SA, Fulcherberguer implemented an unusual sales campaign ahead of the tournament. The ads, featuring Real Madrid star Vinicius Jr., offered an incentive to those looking for a new TV to cheer the team on their bid for a sixth championship: cash for goals.

That’s right. Buy a TV, or another appliance, and get cash -- not store credit -- straight into your bank account, based on how many goals the Brazilian team scores.

“We’ve done our homework, and we’ll make money on the campaign,” Fulcherberguer said in an interview at Bloomberg’s Sao Paulo office.

The World Cup usually boosts TV sales by about 30%, according to the executive. To make sure the company could meet the increased demand, Via sent a group of employees to South Korea and China last year to negotiate with manufacturers such as Samsung, LG and TCL for bulk buys.

The bold sales campaign is part of his latest move in a three-year effort to rescue the company, which offers physical stores and online shopping, and convince investors that it has turned the corner.

Less than a year later, the pandemic hit and Via -- owner of brands including Casas Bahia -- shut down all its stores. In terms of e-commerce, the company was years behind competitors, with only 15% of sales coming from its digital channels at the time. It made a push to keep connected with consumers through the messaging app WhatsApp, to help complete sales for Brazilians not used to buying online.

The strategy worked: it sold a record 3 billion reais in the Black Friday week alone in 2020. Now, even as customers come back to stores, they are more at ease buying online, he says, but that doesn’t mean Via is dialing back on its physical presence. Many customers still prefer to pick up purchases in one of the company’s more than 1,000 brick-and-mortar stores, he said, and some of them also operate as small distribution centers, which helps lower costs.

It’s been more of an uphill battle when it comes to markets -- the stock is down almost 90% since peaking in July 2020. While the CEO has met more than 50 investors from London to New York and Boston this year, money managers have asked to see a few more quarters of stability and growth before coming back.

One pain point has been to get analysts to understand the complexity of Via’s structure, which includes logistics operations and a massive credit arm alongside its physical stores and digital channels.

Via relies on its own bureau of statistics to analyze credit scores for a base of 97 million people, according to Fulcherberguer, which is almost half of the Brazilian population. Its loan portfolio rose to 5.7 billion reais in the third quarter from 3.5 billion reais two years earlier. While Via sells its consumers’ debt to banks, it remains responsible for delinquencies, which hover at about 5%.

The company and analysts have opposite approaches as to how this fits into Via’s balance sheet: while the firm says its net debt ended the third quarter at almost 800 million reais, analysts from Citigroup Inc. calculate it excluding credit card receivables, and thus see a higher amount of about 3 billion reais.

That might be, in Fulcherberguer’s words, “the biggest opportunity and the biggest problem” for the company. Analysts “need to take the receivables into account too,” he added.

For the fourth quarter, expectations are high. A combination of Black Friday, Christmas and now the World Cup means there’s no “room for errors,” but the company is excited about the cash-for-goals campaign.

It has some caveats, of course. It doesn’t apply to all TVs or appliances, and the amount of cash varies depending on the price of the item. The payout is contingent on customers opening an account in the firm’s digital bank BanQi, which will be where the money is deposited -- Fulcherberguer says the process is simple and involves no fees. It will consider net goals, so a 3x2 score for Brazil would mean customers get paid for just one goal, not three. And importantly, it applies only to the first game played after the purchase. With expectations that thousands of sales will have taken place before Thursday’s game, all eyes will be on the debut.

--With assistance from Daniel Cancel.