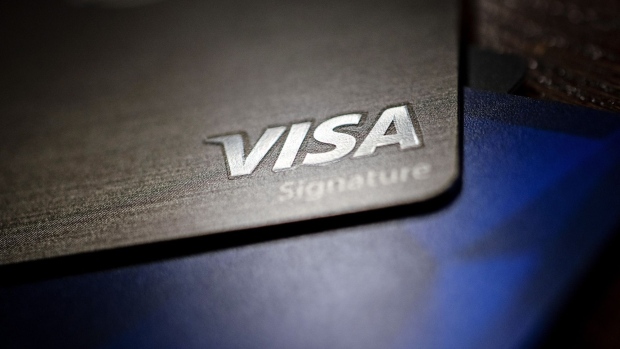 A Visa Inc. credit card is arranged for a photograph in Tiskilwa, Illinois, U.S., on Tuesday, Sept. 18, 2018. Visa and Mastercard agreed to pay as much as $6.2 billion to end a long-running price-fixing case brought by merchants over card fees, the largest-ever class action settlement of an antitrust case. , Bloomberg

(Bloomberg) -- A coalition of trade associations representing some of the world’s largest retailers called on U.S. antitrust regulators to examine the fees charged by credit-card companies after Amazon.com Inc. threatened to ban Visa Inc. cards in the U.K.

The group said it was concerned about the “excessively high” fees Visa and rival Mastercard Inc. charge retailers. Amazon this week announced it would continue accepting Visa credit cards held by U.K. customers after saying it planned to ban such cards on its site starting Wednesday, due to rising transaction costs.

“We believe U.S. authorities should look closely at what Amazon has done in the U.K. and need to be aware that many retailers here feel the same,” the Merchants Payments Coalition said in a letter to regulators, including those at the Federal Trade Commission and the Department of Justice. “Despite the reversal, Amazon’s move shows how frustrated even the largest retailers are over skyrocketing swipe fees, and the situation is even worse for small retailers.”

Retailers have long complained about the rising cost of accepting debit and credit cards. Their disdain has been heightened during the pandemic as card usage swelled and more consumers shopped online, where such fees are even higher.

Visa has defended swipe fees, arguing they help pay for the technology and systems that monitor for fraud and other abuses and also allow for consumers to spend freely and easily at millions of merchants across the globe.

“We’ve sorted these out before, we will get back to the point where our relationship with Amazon goes back to where it used to be,” Visa Chief Financial Officer Vasant Prabhu said last month. “Of course, it takes two to tango.”

Retailers now spend more than $110 billion to accept credit and debit cards every year, according to the industry publication the Nilson Report. While banks reap the bulk of that amount, it’s the card networks like Visa and Mastercard that set the fees.

The Merchants Payments Coalition counts trade associations such as the National Retail Federation and the National Grocers Association as members. The group also sent its letter to congressional committees, the Federal Reserve and the Consumer Financial Protection Bureau.

“U.S. merchants large and small are closely watching the Amazon-Visa developments in the U.K. and hope that U.S. policymakers are doing the same,” the coalition said in the letter. “Few, however, have the size and resources of Amazon that are required to stand up to an entity as powerful as Visa.”