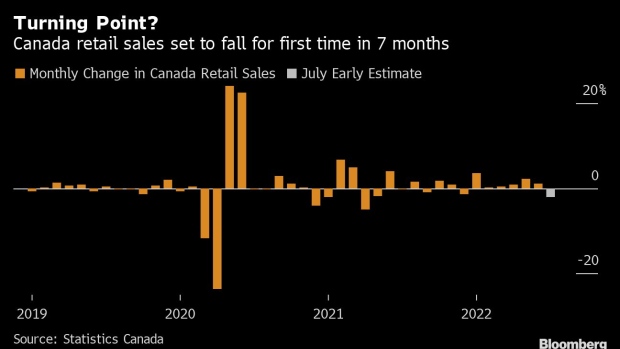 A shopper carries bags through the Uptown Mall in Victoria, British Columbia, Canada, on Tuesday, July 26, 2022. Consumer price inflation accelerated in June to the highest level since January 1983, maintaining pressure on the Bank of Canada to continue delivering aggressive interest rate hikes. , Bloomberg

(Bloomberg) -- Canadian shoppers may be starting to pull back on their spending as inflation erodes their purchasing power.

An advance estimate suggests retail sales dropped 2% in July, Statistics Canada reported Friday in Ottawa. That’s after a 1.1% jump in June, the sixth straight increase, which was driven by higher sales at gas pumps and vehicle dealers.

The July number suggests higher inflation, rising interest rates and slumping confidence may be starting to weigh on household spending following a period of consumer resiliency during the economy’s reopening.

The statistics agency didn’t provide details of the July number, though inflation data from the same month show gasoline prices fell sharply. The early estimate is based on responses received from 36.5% of companies surveyed.

Some of the estimated decline “can be chalked up to lower gasoline prices, but the majority looks to be due to consumer fatigue,” Royce Mendes, head of macro strategy at Desjardins Securities Inc., said in a report to investors. “Canadians have been feeling the pinch from both high inflation and rising interest rates. So it should come as little surprise that retailers are beginning to see the pace of sales slow.”

The 1.1% gain in June beat the 0.4% median estimate from economists in a Bloomberg survey. Sales were up in eight of 11 subsectors, representing 76.8% of retail trade. Excluding autos and parts, retail sales rose 0.8% in June.