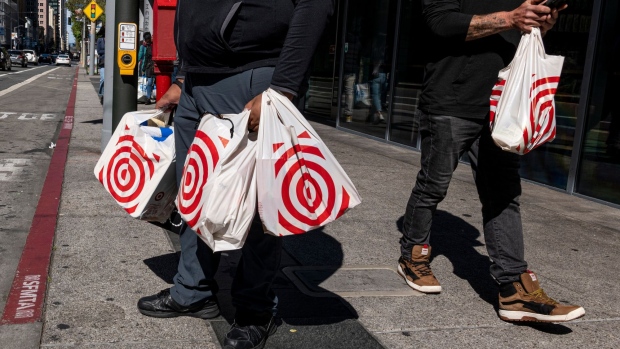 Shoppers carry Target shopping bags in front of a store in San Francisco, California, US, on Tuesday, May 10, 2022. Target Corp. is scheduled to release earnings figures on May 18. , Bloomberg

(Bloomberg) -- Large retailers grappling with supply-chain snarls, inflation and increased automation are cracking down on orders from their vendors.

Stores such as Walmart Inc. and Target Corp. have long fined suppliers that fail to deliver products on time, in the right amount or with the correct specifications. But after the pandemic allowed for some leeway, US retailers are now coming back with tougher standards and tightening expectations on how goods are received.

Anything less than exact compliance can result in penalties from fines to losing shelf space when contract negotiations come up -- a particular challenge for small brands that often have limited resources to scrutinize shipments.

It’s something Marta Cros, who owns a natural skincare company called Apto, experienced firsthand after Walmart started selling some of her products last year. A mishap with the barcodes on an order of lip balms triggered penalties and delayed payments that led to about $200,000 in losses, she said. She recouped roughly 90% of that, but only after about 10 months of back-and-forth with the retailer.

“You need to be very conscious about what you’re getting into,” said Cros, who doesn’t blame Walmart. “You can freaking bankrupt your company if you’re not very careful.”

The changes among retailers are varied. Target is beefing up the team in charge of policing orders, according to a person familiar with the matter. The number of companies levying supply-chain charges also is growing, said David Friedler, managing partner at consumer-goods consultancy Simpactful. And Walmart recently rolled out extra levies for suppliers using its transportation services.

Walmart is telling suppliers that their shelf space will be reviewed more frequently than in the past, a person familiar said, and that vendors with persistent out of stocks could see their products quickly replaced. The retailer also is looking to capitalize on trends, including those sparked by social media, by quickly swapping items in and out.

Target declined to comment. In a statement, Walmart said its goal is ensuring items are in stock.

“The customer is at the center of everything we do and one of the best ways we can help them save time and money is by having the products they want, when they want them,” the company said. “We appreciate our suppliers and the work they are doing to help ensure their products move efficiently through the supply chain to our stores -- and ultimately to more of our customers.”

For suppliers, charges can be make-or-break and eventually affect prices for consumers. Fines and fees can cost sellers as much as 12% of the amount they bill to Walmart, according to SupplyPike, a software company that helps vendors track and fight retailer deductions.

Some suppliers said they’ll start raising prices to recoup the charges, said Stacy Tan, SupplyPike’s vice president of retail insights. Amazon.com Inc. sellers vowed as much when the firm levied a 5% fuel and inflation fee on online merchants that use its shipping services.

“There are companies that are literally saying, ‘we’re paying Walmart more in fines that we made on this invoice,’” Tan said.

Store operators that grappled with empty shelves over the past three years say that penalties encourage vendors to get their supply chains in order to avoid out of stocks, which in 2021 cost consumer-goods retailers $82 billion, according to NielsenIQ.

The fines are costly for manufacturers. McKinsey estimated in 2018 that sanctions for faulty shipments could rise collectively to $5 billion a year in the US if consumer-packaged goods companies didn’t get their act together -- and that was before the pandemic-fueled supply chain chaos and higher retailer expectations.

“The range of areas that retailers are assessing, either fines or fees, is broader than in the past,” Simpactful’s Friedler said. “There are certainly tensions in the relationship between the two parties.”

Along with Walmart’s new fuel surcharge, the retailer also implemented a pickup fee assessed as a percentage of cost of goods received. The charge ranges from 0.01% for eyewear to 5.51% for some fabrics-and-crafts materials, according to an internal document.

Walmart also is rolling out automated warehouses where robots receive, store and retrieve products. That means labels and barcodes must be correct and placed in the right spot or machines won’t be able to read them.

Some vendors argue that charges aren’t about ensuring products are on shelves, but rather about shoring up retailer margins. When Walmart introduced the fuel and department-based fees, it said it wanted to “share cost accountability” so it could continue offering its signature “everyday low prices.” The retailer expects earnings per share to decline as much as 11% this year in part because of inflation.

Suppliers agree to potential fines when they sign contracts with retailers, said Jonathan Greenway, global leader of the consumer-products practice at consulting firm AlixPartners. Still, the magnitude of the penalties can surprise smaller companies looking to expand sales, since they often focus on getting into as many stores as possible rather than the quality of their supply chain.

Artisan coffee purveyor Bean Box, which entered Walmart this year, uses a workaround: It only bills the retailer for the number of cases that actually made it to a distribution center, not for the number ordered. That way invoices won’t get held up over the difference, allowing the coffee firm to get paid on time, said Chief Executive Officer Matthew Berk.

“We’ve engineered our whole process to be as Walmart-friendly as possible,” he said.

Looking back, Apto’s Cros said it might have been a good idea to start off with fewer than the 3,500 Walmart stores her brand is currently in. But she was eager to do business with the retailer, which helped reach her target audience of busy moms and smooth the path to other chains.

“I don’t think it’s a retailer’s responsibility to hold your hand,” Cros said. “You need to put your big girl pants on and deal with it.”