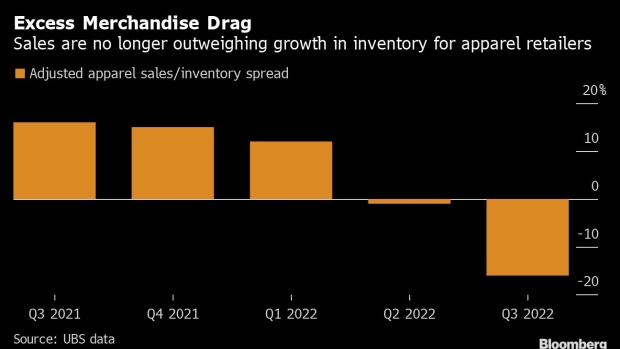 Shoppers carry bags in San Francisco, California, US, on Thursday, Sept. 29, 2022. US consumer confidence rose for a second month in September to the highest since April, indicating a strong job market and lower gas prices are contributing to more optimistic views of the economy. , Bloomberg

(Bloomberg) -- The inventory glut that dragged down US retailers over the past two quarters may only be getting worse. For shoppers, that means better deals.

Inventory levels have increased sequentially and are at the highest level relative to sales since the start of the pandemic, UBS Group AG analysts led by Jay Sole said in a recent note. Nike Inc. said Thursday that its North American inventories grew by a whopping 65% in the fiscal first quarter ended Aug. 31, well above the growth that set off alarm bells earlier this year at companies such as Walmart Inc., Target Corp. and Gap Inc.

Americans have largely shifted their spending away from things like apparel and footwear -- in favor of travel and entertainment -- leaving retailers with far more merchandise than they can sell at full price. At the same time, slower economic growth, inflation and higher interest rates are adding to concerns that consumers may slow their purchases in the second half of this year.

“The biggest variable impacting how quickly companies can clear excess inventory is consumer demand,” the UBS analysts wrote on Sept. 21. “If consumer demand is weak, discounts will need to be steeper and this would result in more gross margin pressure.”

Nike said late deliveries and early holiday orders contributed to its inventory glut. Chief Financial Officer Matthew Friend said he expects the situation to have a “transitory impact on gross margins this fiscal year.” The company will tighten its “inventory buys around the world based on some of the risks that could materialize in the second half,” he said.

Retailers use a number of strategies to offload excess stuff, including discounting or holding merchandise for another season. The problem with fashion merchandise specifically is that “it doesn’t get better with age and the longer companies hold excess goods, the deeper the markdown they will eventually have to take on those items,” the analysts at UBS said.

Another option is to sell unwanted goods to off-price retailers like TJX Cos Inc. and Burlington Stores Inc.

“We’re going to have some of the best branded content we’ve had in a while.” TJX CFO Scott Goldenberg said on an August earnings call.

“Economic slowdowns have historically benefited off-price retail,” Dana Telsey, chief executive officer of Telsey Advisory Group, said in a note in late August. “We expect the supply of off-price merchandise to significantly increase, which can further benefit next year.”

Channel Control Merchants LLC, an inventory liquidation company that operates about 90 off-price stores throughout the US southeast, has added an additional 25 retailer clients in the last eight months, said CEO Chris Homewood.

“We have seen more access to brands that we haven’t in the past, there’s higher-end inventory,” Homewood said. “We’re seeing access to inventory and brands that we traditionally had not seen before, and it’s at a killer value.”