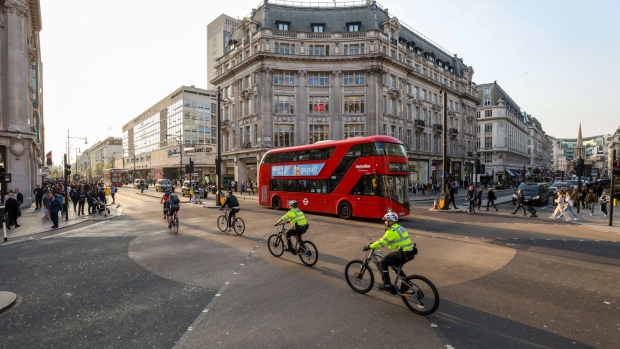 Police officers cross Oxford Circus on bicycles in central London, U.K., on Thursday, March 24, 2022. The Office for National Statistics are due to release the latest U.K. retail sales figures on Friday. , Bloomberg

(Bloomberg) -- Retailers including Tesco Plc and J Sainsbury Plc are calling on British police to focus on retail crime as the cost of living weighs heavily on shoppers and leads to theft.

More than 100 retailers have written a joint letter to Police and Crime Commissioners in England and Wales expressing concerns about rising levels of abuse and anti-social behavior toward staff, according to a statement Thursday from the British Retail Consortium, which is coordinating the effort.

The appeal comes as the surging cost of energy, fuel and food leads to more reports of abuse and theft in UK stores. Iceland Foods Managing Director Richard Walker said he receives reports of aggressive behavior every week and that incidents are rising “because people are struggling,” according to comments to Good Morning Britain last month.

Many British consumers are already struggling with the highest inflation in four decades and the situation is set to worsen. The Bank of England recently warned inflation is expected to peak at 13.3% in October amid a surge in gas prices, and gains will remain elevated throughout 2023.

A new law introduced earlier this year has increased the penalties for assaulting a retail worker, but this will only have an impact if police successfully investigate and prosecute these incidents, the BRC warned.

“Retailers are going above and beyond to keep their colleagues and customers safe, hiring in-store security teams, training staff on de-escalation, and investing in CCTV and body worn cameras,” Helen Dickinson, chief executive of the BRC, said in the statement. “Every incident against a retail worker is one too many.”