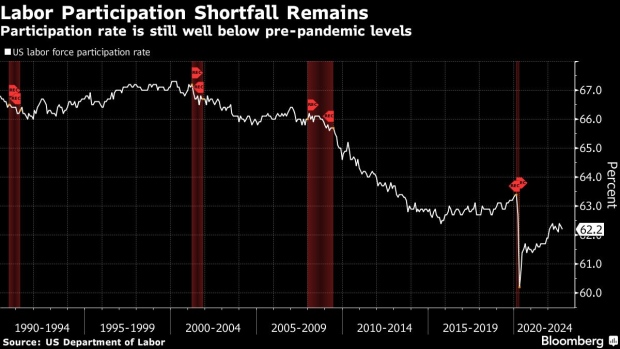 Jerome Powell, chairman of the US Federal Reserve, speaks at the Brookings Institution in Washington, DC, US, on Wednesday, Nov. 29, 2022. Powell signaled policymakers will downshift from their rapid pace of tightening as soon as next month's meeting while stressing that the central bank's inflation fight is far from over, with rates set to rise further and stay at restrictive levels for some time. , Bloomberg

(Bloomberg) -- Federal Reserve Chair Jerome Powell said the shortfall in labor force participation in the US relative to its pre-pandemic trend is mostly due to excess retirements, which can’t be expected to reverse anytime soon.

“Some of the participation gap reflects workers who are still out of the labor force because they are sick with Covid-19 or continue to suffer lingering symptoms from previous COVID infections,” Powell said Wednesday in remarks prepared for a speech at the Brookings Institution in Washington.

“But recent research by Fed economists finds that the participation gap is now mostly due to excess retirements -- that is, retirements in excess of what would have been expected from population aging alone,” he said. “These excess retirements might now account for more than 2 million of the 3 1/2 million shortfall in the labor force.”

The combineation of lower net immigration and a surge in deaths during the pandemic probably together account for about 1.5 million missing workers, Powell said.

Fed officials have been raising interest rates quickly this year in a bid to bring inflation down from four-decade highs. The central bank’s benchmark federal funds rate is now just below 4%, and investors generally expect it to peak around 5% sometime next year, according to futures contracts.

In his speech, Powell emphasized that the Fed couldn’t count on a rise in labor supply to help moderate wage and price pressures in the near term, and instead needed to continue raising rates in order to slow the economy and bring down labor demand.

Labor force participation was 62.2% in October, more than a full percentage point below the 63.4% rate in February 2020. Forecasters expect November data, due out from the Labor Department on Friday, to show an uptick to 62.3%, according to the median estimate in a Bloomberg survey.