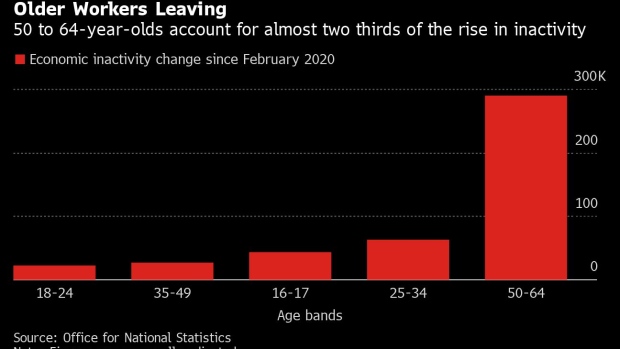 PLYMOUTH, ENGLAND - APRIL 08: An elderly couple sit in the sunshine on the Hoe promenade overlooking the sea on April 08, 2020 in Plymouth, England. There have been around 50,000 reported cases of the COVID-19 coronavirus in the United Kingdom and 5,000 deaths. The country is in its third week of lockdown measures aimed at slowing the spread of the virus. (Photo by Dan Mullan/Getty Images) , Photographer: Dan Mullan/Getty Images Europe

(Bloomberg) -- Most older workers who dropped out of the UK labor force during the pandemic chose to retire in a trend that will have a “substantial” economic impact if it continues, the Institute for Fiscal Studies warned.

Analysis by the think tank found that more than 250,000 people aged 50 to 69 quit work in the last two years, of whom 53% said they had “retired.” No more than 13% did so for any other reason, including sickness or concerns about Covid when working close to other people.

A sharp rise in inactivity, those who neither have nor want a job, has been a main cause of worker shortages in the UK that have sparked travel chaos. The Organization for Economic Cooperation and Development has said persistent shortages could force firms to shut operations permanently.

The loss of older staff has been a large part of the problem, reversing a decades-long trend that has seen people working longer into life. Economic inactivity for those between 50 and 69 fell from 47% in 2000 to 35% by early 2020. It has since increased to 36.5%.

“It is too early to say whether this presages a new trend to earlier retirement, but if it does the consequences for both the economy and the public finances could be substantial,” the IFS said.

Separate research by the Resolution Foundation found the number of retiring baby boomers -- those born in the two decades following World War II -- will pass 800,000 a year for the first time ever in 2028 and continue rising thereafter. That will push up the average age of the UK population, the researcher said.

However, a “millennial baby boom” will bring down the average age of the working-age population. The cohort, born between 2000 and 2010, will account for 900,000 new 22 year-old workers a year in 2032, the first time the milestone will have been passed in decades.

The overall ageing population will add £24 billion to the cost of the state pension and £52 billion to health spending by 2030-31 compared to 2022-23, Resolution said. Funding those costs “could push taxes up, not down, over the coming decade.” The government has pledged to cut taxes in the years ahead.

The older demographic will mean the UK needs 488,000 more health-care workers and 627,000 more social-care workers “to keep up with demand.” Spending on leisure activities will increase by 4.5% as older people consume more recreation.