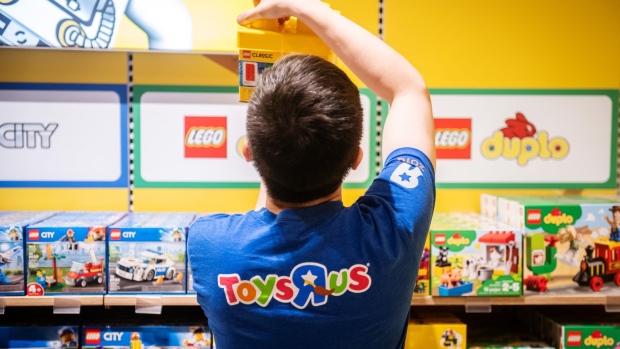 An employee arranges a display of Lego A/S toys inside a Toys "R" Us Inc. store in Paramus, New Jersey, U.S., on Tuesday, Nov. 26, 2019. The new store in the Garden State Plaza is the first of 10 locations planned to be operational by the end of next year. Photographer: Mark Kauzlarich/Bloomberg , Bloomberg

(Bloomberg) -- Toys “R” Us, a resuscitated version of the mega-toy seller that went bankrupt and out of business, is returning to its New Jersey home turf with a store in the state’s newest megamall.

The new owner of the brand plans to open a flagship location in mid-December at American Dream, the heavily indebted mall a few miles outside of Manhattan that’s working through its own decades-long string of troubles. The two-level store will occupy 20,000 square feet, according to a statement, with the outlet steps away from the mall’s kid-friendly Nickelodeon Universe Theme Park and DreamWorks Water Park.

Toys “R” Us, which was based in nearby Wayne, filed for bankruptcy four years ago, unable to cope with online rivals and retail giants like Walmart Inc. that used deep discounts on toys to attract shoppers. The chain closed the last of its 800 stores the following year, leaving a trail of empty big-box stores and unhappy workers who said they were overlooked as the company wound down.

Like many well-known brands in bankruptcy, Toys “R” Us gained a second life when Tru Kids Inc., an entity made up of creditors, bought its intellectual property. Tru Kids had its own store strategy but closed its two U.S. locations early this year. Oaktree Capital-backed WHP Global then bought a controlling interest and said it plans to open more than 400 shops within Macy’s Inc. stores next year.