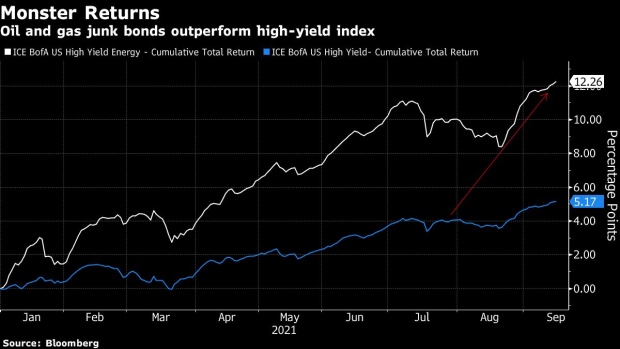 (Bloomberg) -- Snapping up the high-yield bonds of oil companies is proving a lucrative ploy for investors willing to live with a mounting backlash against activities seen to hasten global warming.

In June, Ithaca Energy Inc., which operates drilling rigs in the North Sea, paid a 9% coupon to sell junk bonds maturing in 2026, almost triple the average coupon of European high-yield debt. In the U.S., Talos Energy Inc. dangled a 12% coupon in front of investors in December to sell five-year securities.

That’s a sign of the tough borrowing terms already facing an industry grappling with commodity price volatility and high indebtedness as the transition to a greener world gathers momentum. Bond coupons for oil and gas firms now average around 6.2% compared to 3.4% for other European high-yield issuers, according to data compiled by Bloomberg.

Oil and gas “remains one of the only areas in the high-yield space that’s offering up to double digit returns,” said David Newman, chief investment officer for global high yield at Allianz Global Investors, in an interview.

In a world where global monetary stimulus has boosted the pile of negative-yielding debt to a record high, the yields offered by junk-rated extractors of fossil fuels offer a tempting opportunity. But as they weigh whether to seize it, fund managers must also take account of the growing stigma attached by governments and investors to environmentally-harmful activities.

The attractions of oil and gas junk bonds aren’t limited to their sky-high coupons.

Borrowers from the industry are cutting back capital expenditure and plowing funds back into their businesses. That’s helping to force down debt-to-Ebitda ratios, a rarity in Europe’s junk bond markets where leverage multiples are at all-time dizzying highs.

“Most companies in the high-yield market are levering up while lowering their cost of funding, but oil and gas companies are going in the opposite direction,” Newman said. “We see it as a huge opportunity this year.”

Another draw for investors is that the typically shorter maturities of oil and gas bonds offer protection against the inflation that’s being spurred as economies bounce back from the pandemic.

In the short term at least, the cost of avoiding a sector which accounts for a large part of the U.S high-yield index looks too great, Azhar Hussain, head of global credit at Royal London Asset Management, said in an interview.

“You can’t exclude carbon in a global high-yield portfolio without it impacting your return as over 15% of the sector is oil & gas directly,” he said.

Asked about the potential reputational damage of continued investment in fossil fuels, Hussain said it’s better for investors to communicate with companies about their plans for change, rather than turn their backs.

“Engagement, not exclusion, is the better approach,” he said. “By being invested, it gives you a seat at the table to actually have a line of communication into the company and be able to change things.”

Over the last month, the energy sector has returned around 90 basis points versus 54 basis points for U.S high-yield as a whole, according to ICE BofA US indices. U.S energy bonds have handed investors an 11% return year to date, compared with 4.6% for broader U.S high-yield debt.

But there’s also no question that pressure is mounting on investors to prune borrowers linked to fossil fuels and high carbon emissions from their portfolios. That’ll end up tightening the screw on companies in the sector by driving up borrowing costs.

“Without a demonstrable change and addressing ESG expectations, firms will find debt capital harder to access, including in the distressed and high-yield spaces,” said Tim Metzgen, head of debt advisory at turnaround specialist Alvarez & Marsal in London.

In five to 10 years, there won’t be many oil and gas borrowers left still able to tap the bond markets, he said. According to Metzgen, their main source of funding will increasingly come from equity, instead of debt.