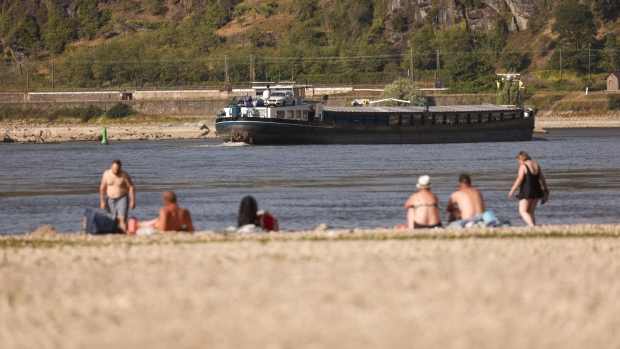 A barge passes residents on an exposed riverbed on the River Rhine near Loreley, Germany, on Friday, Aug. 12, 2022. The Rhine River fell to a new low on Friday, further restricting the supply of vital commodities to parts of inland Europe as the continent battles with its worst energy crisis in decades. , Bloomberg

(Bloomberg) -- The Rhine has reopened at St. Goar, Germany for barges moving goods inland, according to the WSA water authority.

The river was blocked to all commercial traffic early Wednesday between St. Goar and Oberwesel when a vessel suffered a technical fault. That barge has been towed away, a spokesman for the WSA said by phone.

The blockage occurred on a narrow part of the river near a key chokepoint at Kaub, south of Cologne. It occurred just as the water level at Kaub is starting to edge higher.

Low water levels are currently severely restricting the shipment of commodities along the Rhine, which snakes for about 800 miles from the Swiss Alps down to the North Sea.