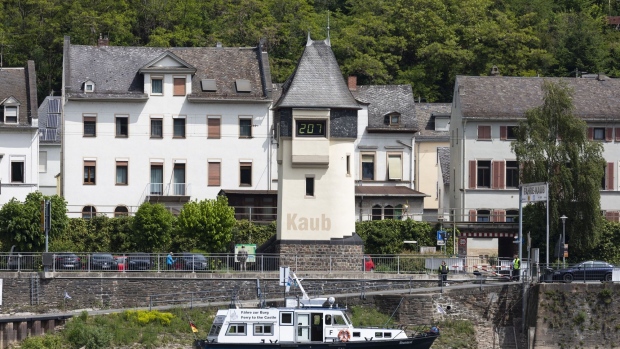 A split-flap display shows the River Rhine water level of 207 centimeters in Kaub, Germany, on Thursday, May 16, 2019. Drought brought traffic at the shallowest points on the Rhine to a halt in 2018, slashing German economic growth by 0.7 percentage points. , Bloomberg

(Bloomberg) -- Water levels on the Rhine are set to rise over the weekend, potentially providing some respite to a crisis that has upended the shipment of energy products and other goods along one of Europe’s most important rivers.

The marker at Kaub, a narrow and shallow waypoint west of Frankfurt, is set to rise to 67 centimeters (26.4 inches) by Aug. 22, German government data show. That compares with a current level of about 36 centimeters.

The level is not the actual depth of the water, which can be several feet deeper, but rather a measure for navigability. At 40 centimeters or below, many barges find it uneconomic to transit that stretch of the waterway.

To be sure, the crisis is far from over, with at least some vessels having to restrict loads if passing through the chokepoint. The low water, the result of hot and dry weather, is exacerbating a historic energy-supply crunch that is fanning inflation across the European Union and threatening to tip some of the region’s largest economies into recession.

Energy prices in the region and barge rates along the river remain near record highs. Ford Motor Co. said Wednesday that it has curbed barge loads from Cologne -- from where it sends vehicles to ports in Belgium and the Netherlands -- by as much as 30% due to the low water, but it has also increased the frequency of shipments.

The Rhine, which runs from Switzerland to the North Sea, is a key waterway for moving goods through some of the most industry-heavy parts of the continent. In 2020, that included roughly 28 million tons of mineral oil products, 19 tons of chemicals and 17 tons of coal, according to the most recent report from the Central Commission for the Navigation of the Rhine.

Huge price fluctuations and varying volumes make it exceptionally difficult to put a current value on all the goods shipped along the Rhine, according the secretariat of the CCNR. Energy prices are highly volatile, with futures for coal soaring to a record this week amid Russia’s cuts to natural gas supplies.

Moscow’s war in Ukraine is worsening the impact of the low-water crisis by tying up some barges for the transport of grain from Ukraine to central and western Europe, the organization said.

Rain is forecast in Germany in the coming days, though the relief may be short-lived. Temperatures in the country are set to climb next week, according to forecaster Maxar Technologies Inc.

“Within the next few days, the water levels will rise again in the entire Rhine catchment area due to the announced precipitation,” the Rhine Waterways and Shipping Authority, known as the WSA, said in a statement, referring to the middle and lower parts of the river.

“The 14-day forecast further suggests that water levels will rise by about 50 centimeters by the end of next week, but will subside after the wave has passed,” it added.

Even after the weekend, the marker at Kaub is set to be far below the five-year average of about 1.7 meters.

Separately, the Rhine is now open in both directions after a vessel that suffered a fault on Wednesday was towed away, a spokesman for the WSA said. The incident, which wasn’t related to low water, temporarily blocked traffic between St. Goar and Oberwesel, near Kaub.

(Updates with information from Rhine commission from sixth paragraph.)