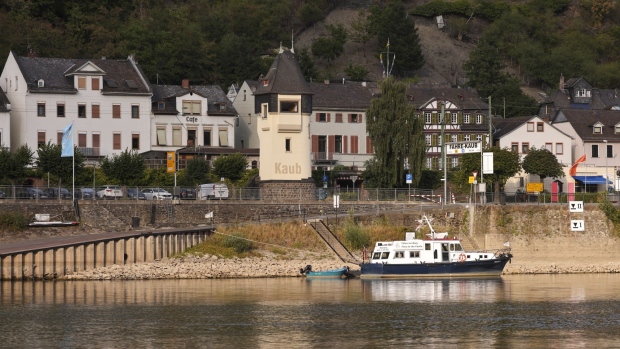 Exposed banks in Kaub, Germany, on Friday, Aug. 12, 2022. The Rhine River fell to a new low on Friday, further restricting the supply of vital commodities to parts of inland Europe as the continent battles with its worst energy crisis in decades. , Bloomberg

(Bloomberg) -- The water level at a key waypoint on the Rhine River is poised to steady at an extremely low level this week, as a climate crisis compounds Europe’s worst energy supply crunch in years.

The marker at Kaub, a narrow and shallow point west of Frankfurt, is set to drop to 30 centimeters (11.8 inches) by Monday and hold near that level until at least Aug. 18, the latest German government data show. A forecast on Saturday showed it dipping slightly below the 30-centimeter mark in the coming week.

The Rhine is western Europe’s most important river for the transport of fuel and other industrial goods. Many barges find it uneconomical to transit past Kaub when the water level there is at 40 centimeters or below. It’s currently at about 35 centimeters. The marker is not the actual depth of the river, but rather a measure for navigability.

Read: What German Companies Are Doing as the Rhine Recedes