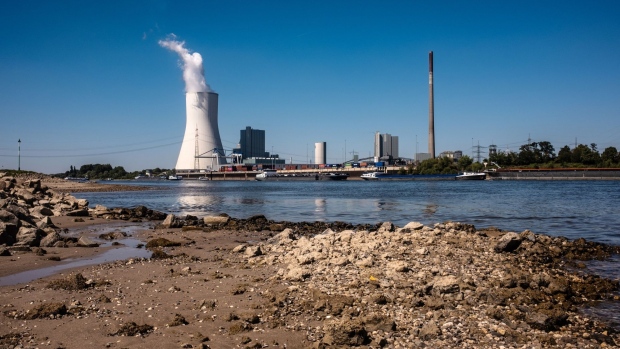 An exposed section of the River Rhine riverbed, due to low water levels caused by drought, opposite the Duisburg-Walsum combined heat and power plant, operated by STEAG GmbH, in the Walsum district of Duisburg, Germany, on Wednesday, Aug. 10, 2022. In the midst of an arid summer that has set heat records across Europe the continent's rivers are evaporating and there's little chance these once-reliable lifelines will quickly rebound as the climate crisis worsens. , Bloomberg

(Bloomberg) -- A closure of the Rhine River could disrupt the daily trade of hundreds of thousands of barrels of oil products, piling yet more pressure on Europe’s energy-supply chain.

The water level at Kaub, west of Frankfurt, is forecast to drop below a critical 40-centimeter mark (under 16 inches) on Friday, and to 33 centimeters on Monday. At that point, it becomes uneconomical for many barges to carry goods through the waypoint, limiting supplies to parts of Germany and Switzerland.

“Rhine closure could disrupt 400,000 barrels a day of oil-product trade,” consultant Facts Global Energy said in a report dated Aug. 10. “A major disruption to an important gasoil/diesel supply route from Amsterdam-Rotterdam-Antwerp to inland Europe could not come at a worse time.”

Inland Europe is already short of diesel-type fuel, a result of outages at multiple refineries concentrated around the Austria-Germany border. More switching from expensive natural gas to oil by industry will also likely increase demand “at the margin,” FGE said.

The Rhine is the single most important method of transport for oil products from Amsterdam-Rotterdam-Antwerp to Germany and Switzerland. Last year, 240,000 barrels a day were hauled upriver by barge for unloading in Germany, with a further 50,000 barrels a day of gasoil/diesel, jet fuel/kerosene and gasoline shipped upstream to Switzerland, and unloaded near Basel.

Fuel is also barged downriver, with 90,000 barrels a day -- mostly gasoline -- sent last year from Germany for unloading in the Netherlands and Belgium.

One alternative is the RMR oil-product pipeline that runs from Rotterdam to Ludwigshafen, to the south of Kaub, and can carry as much as 250,000 barrels a day. However, it usually operates near maximum capacity, so there would be little room available to take extra flows, FGE said.

Rail is another option. It’s used to send about 25,000 barrels a day of oil products from the ARA area to Germany, and an additional 30,000 barrels a day from Germany to Switzerland. But railways are running near full capacity, partly because of a shortage of staff and tankers but also because demand has risen -- from oil and other sectors like coal.

“Road freight is therefore the best option for replacing barges,” FGE said. “But this will be both more costly -- driven by high fuel prices and high demand -- and difficult, given that road tankers and qualified drivers are also in short supply.”