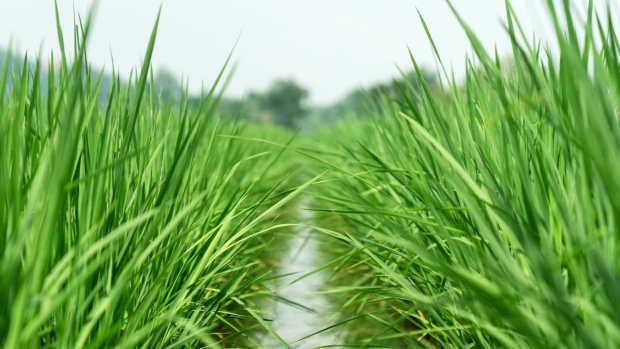 RD79 (Rice Department 79) rice is grown in a pilot field at the Chai Nat Rice Research Center in Khao Tha Phra, Chai Nat, Thailand, on Monday, Oct. 26, 2020. For Thailand, rice isn't just central to its cuisine, it's the country's most important crop, one that supports more than 4 million households. Photographer: Nicolas Axelrod/Bloomberg , Bloomberg

(Bloomberg) -- The massive rally in fertilizers is coming for rice, a staple food for half of the world’s population, with farmers in one of the top exporters bracing for exorbitant prices of crop nutrients in the coming planting season.

The cost of fertilizer in Thailand is on track to double from 2020, with prices now at 16,000 baht ($480) per ton compared with an average 10,000 baht last year, according to Pramote Charoensilp, president of the Thai Agriculturist Association, which represents rice farmers in the world’s third-biggest shipper.

“It’ll be a problem for rice farmers in coming months. Many of them have already harvested last season’s rice and are getting ready for planting so they’ll need fertilizer,” Pramote said in an interview on Tuesday. “A ton of fertilizer is now more expensive than a ton of rice.”

Rice is a food staple in many countries in Asia and surging fertilizer prices because of a global energy crunch are set to raise costs for many farmers in the region. In some countries, that may lead to governments having to step in to boost farmer subsidies in order to ensure essential supplies.

Like many other rice-producing nations, Thailand imports almost all of its urea, phosphate and potassium from abroad, including from China. That makes the country more susceptible to changes in Chinese export policies, and the woes are exacerbated by rising logistic costs.

China is stepping up inspection of fertilizer exports amid concern over the impact of rising prices on domestic food security, according to a customs notice dated Oct. 11. China is a key supplier of urea and phosphate to the global market, including to major buyers such as India, Pakistan and Southeast Asian countries.

While floods spared most of Thailand’s rice fields and exporters are keeping to a shipment target of 6 million tons this year, fertilizer costs will become a “big issue” for farmers already struggling with low prices, Pramote said. “The government should intervene.”