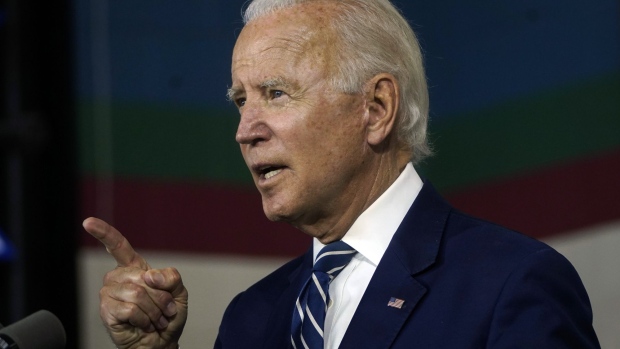 (Bloomberg) -- With Joe Biden leading President Donald Trump in the polls, some investors are concerned the age of corporate tax cuts and deregulation may soon end, replaced by a Democratic administration eager to soak the rich.

Those fears are unfounded, according to UBS Group AG.

While Biden has proposed tax increases on high-income individuals and corporations, such hikes would be offset by massive spending packages targeted at accelerating the country’s recovery from the coronavirus, the investment bank said.

And unlike in 2008, banks aren’t seen as the bad guys in today’s crisis -- meaning a Biden administration would likely refrain from tightening regulations on the financial industry, according to Solita Marcelli, UBS’s chief investment officer for the Americas.

Biden will focus more on ensuring a rapid economic recovery than on punishing wealthy investors, which would be a boon for the stock market and ultimately prevent drastic changes to corporate profits, Marcelli said at the company’s midyear media roundtable this week.

An estimated 5% reduction in S&P 500 Index earnings under Biden’s corporate-tax plan could be offset by the Democratic candidate’s proposed stimulus spending and investments in infrastructure, climate change and other initiatives, according to UBS.

“We suspect that Biden will further tilt toward pro-growth policies, especially now that policy winds have shifted,” Marcelli said. “Focusing on balanced budgets in the near-term is not a priority for politicians, nor financial markets for that matter.”

The potential economic gains from those spending packages would also make up for higher taxes on wealthy individuals, whose spending behavior probably wouldn’t change anyway, Marcelli said. Biden’s proposals include income and payroll tax increases for high-income individuals, as well as raising corporate taxes to 28% from 21%.

Populist demands to tax the rich have increased in recent months as the pandemic exacerbates the wealth gap and puts pressure on cash-strapped local and state budgets. Biden this month said the idea that U.S. companies only have responsibility to their shareholders is “an absolute farce,” arguing instead that they have a duty to workers and the country.

Still, the almost $4 trillion that Biden’s tax regime would raise is much less than the new federal spending -- estimated by the Wall Street Journal at $7 trillion-plus -- he’s proposed for the next 10 years. Biden recently launched his “Build Back Better” plan centered around reviving U.S. manufacturing with a buy-American focus, though it steers clear of big-ticket progressive proposals like the Green New Deal.

“We know some are ready to go all in on a Biden family-investment strategy,” Marcelli said. “But when it comes to our guidance to our clients, it still remains that we don’t advise investors to try and predict the outcome and make drastic portfolio moves.”