At the end of January, an impeccably preserved painting by Italian Renaissance artist Sandro Botticelli sold for a record US$92.2 million. Six weeks later, a work that could not be further from the Old Master, a digital compilation of images by an artist who goes by the name of Beeple, sold for US$69.3 million.

The two pieces are worlds apart but their desirability is driven by similar factors. Although the art market suffered from pandemic closures, it’s been saved by an undiminished appetite among wealthy collectors for prestige investments, as well as an influx of younger, tech-savvy buyers whom galleries and dealers have managed to reach online.

Even when art fairs and in-person auctions resume, the industry won’t forget its digital transformation. Last week’s blockbuster sale of “Everydays: the First 5000 Days,” by Mike Winkelmann, aka Beeple, suggests as much. 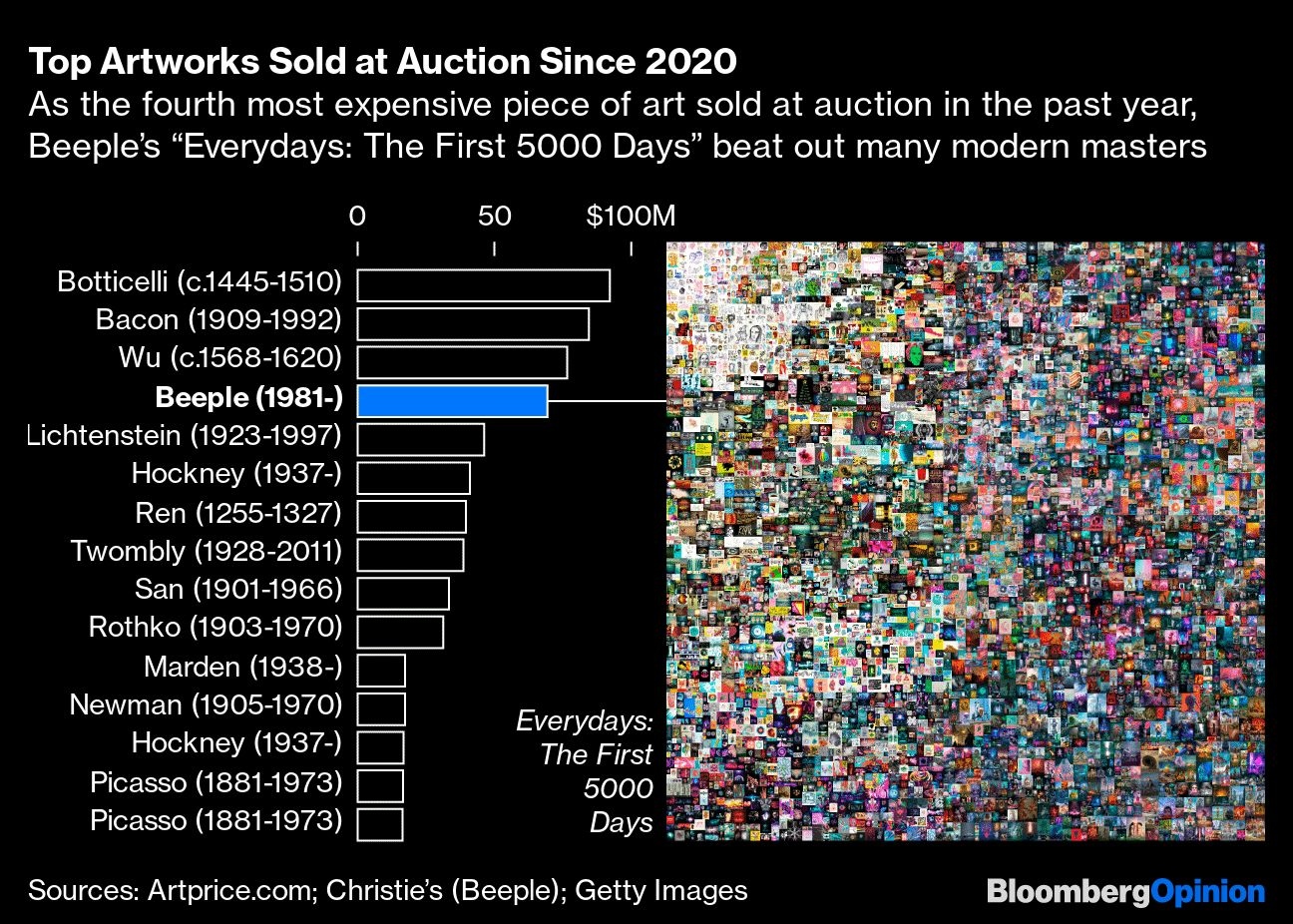 With stock markets and cryptocurrencies close to all-time highs, many investors have seen their wealth grow, just as they’ve had fewer trips and experiences to spend on. So those with money to spare have splurged on things. The more modest have treated themselves to Louis Vuitton handbags and Gucci sneakers, driving demand for the biggest brands to pre-pandemic levels. The ultra-rich may prefer a Cy Twombly.

This didn’t make the art market immune to the pandemic, however. Global sales of art and antiques fell 22 per cent from the year earlier to US$50.1 billion in 2020, according to art economist Clare McAndrew’s latest state-of-the industry report for Art Basel and UBS Group AG. Traditional buyers had fewer opportunities to purchase, as fairs were cancelled and galleries were temporarily closed. Still, sales managed to stay above their previous low in 2009 in the wake of the global financial crisis. 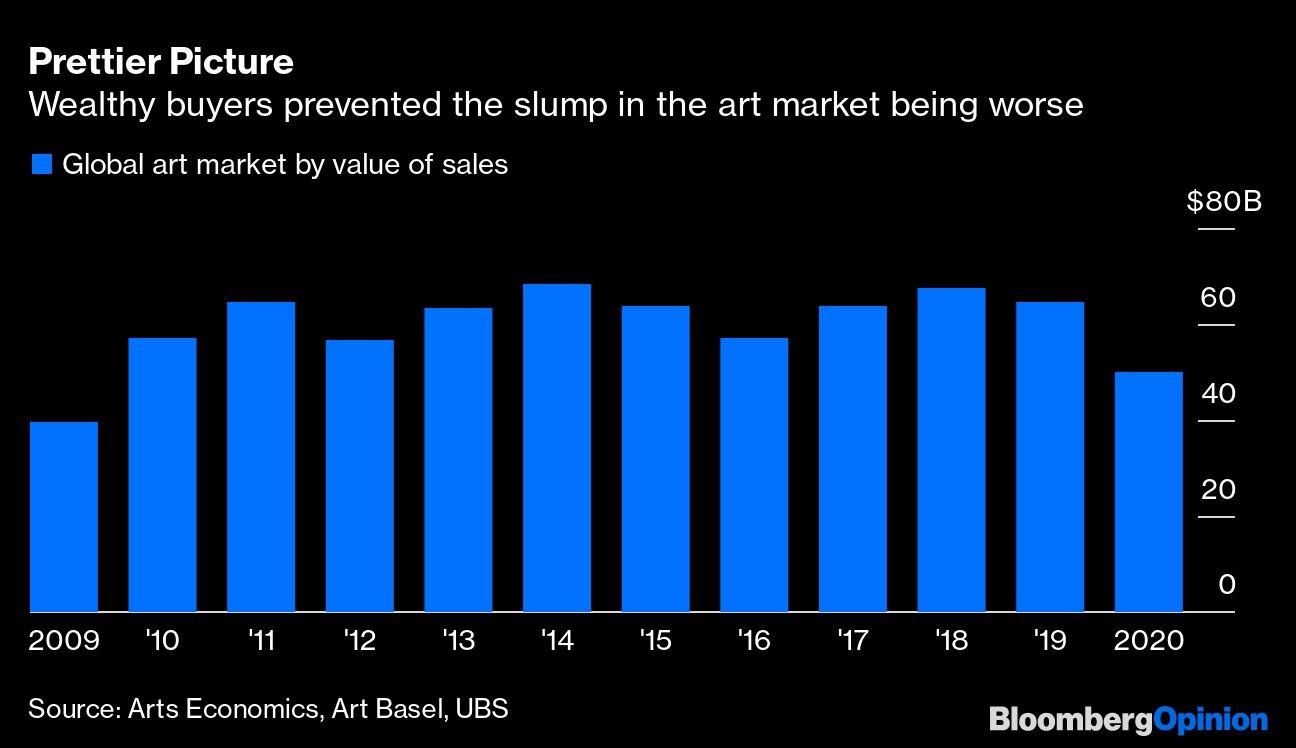 The decline would have been much worse were it not for wealthy collectors who spent more time at home and wanted to beautify their surroundings with art. It was a similar picture with virtual works. More hours glued to a screen encouraged crypto investors — flush with Bitcoin gains — to explore the nascent medium of art attached to a non-fungible token (NFT), a digital certificate of authenticity that runs on blockchain technology.

Galleries and auction houses pivoting online also prevented a more precipitous fall. Web sales of art and antiques reached a record US$12.4 billion in 2020, double the value of the previous year and accounting for 25 per cent of overall market value, according to McAndrew. 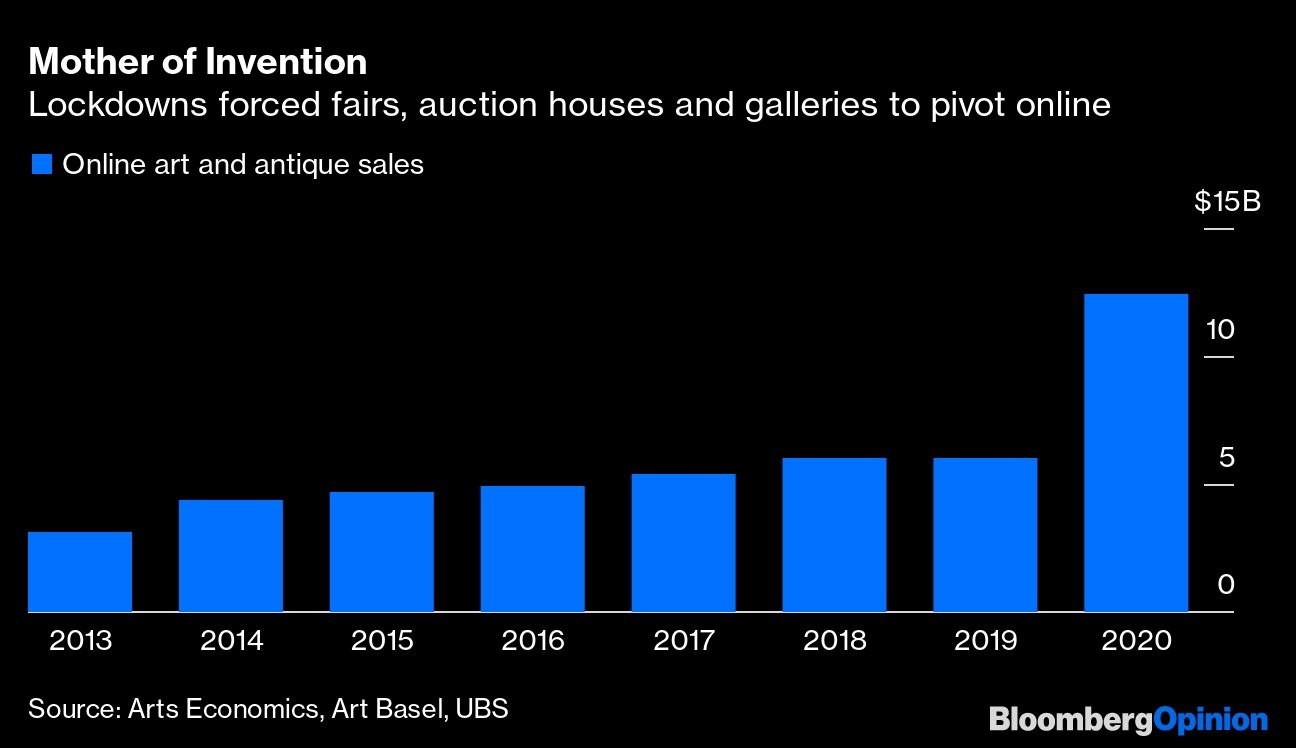 The shift to digital selling has also brought in a younger generation of collectors, who are more active online and spend at higher levels. The Art Basel and UBS report found that three out of 10 millennial high net-worth collectors splashed out at least US$1 million in 2020. That’s compared with 17 per cent of boomer collectors. Christie’s said that 58 per cent of the bidders for Beeple’s “Everydays” were millennials. 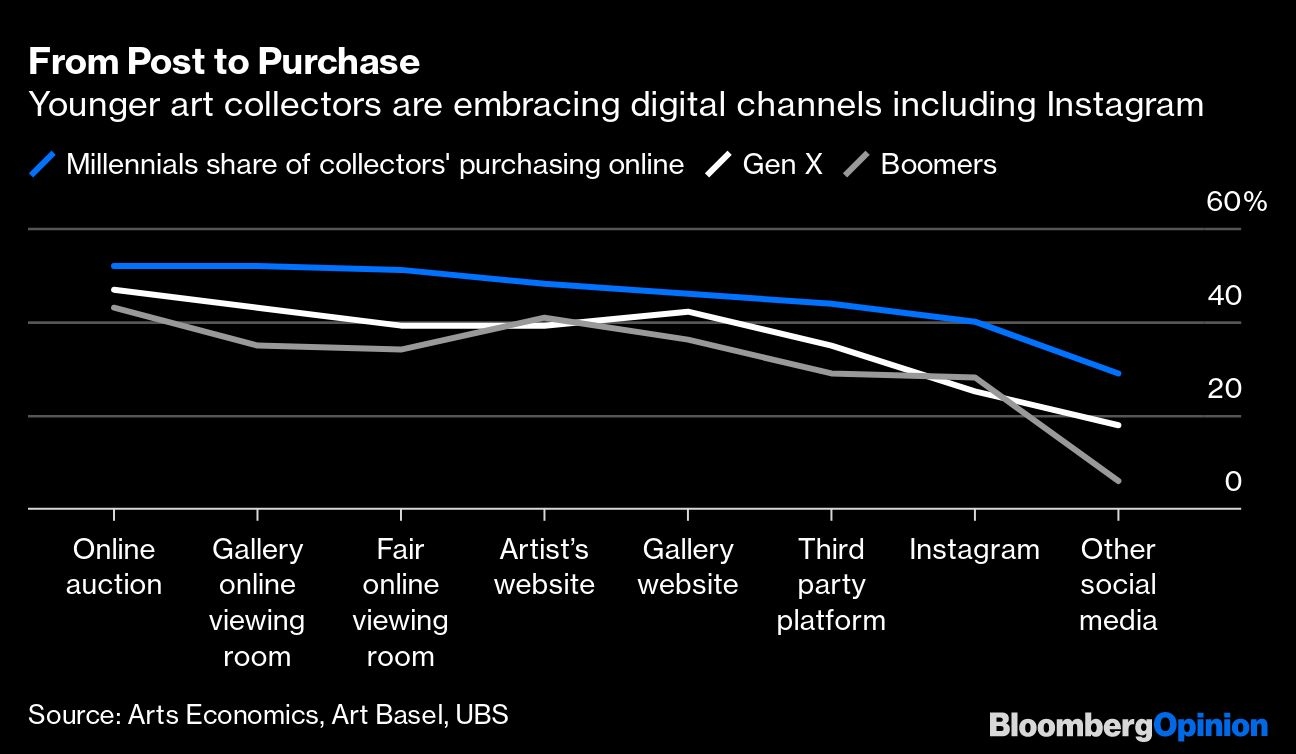 The influx of youthful buyers also seemed to affect tastes in the market, as interest in younger and more global artists grew. For example, the painter Amoako Boafo from Ghana achieved the second-highest revenue at auctions in 2020 among artists born after 1980, trailing only the late Matthew Wong, according to online database Artprice.com.

The most striking manifestation of the shift online has been the rise of crypto art, which you view on a screen rather than up on a wall. Blockchain technology has made it easier to establish the ownership of such digital art, something that has dogged the medium. Beeple’s “Everydays” existed for less than a month before it was auctioned last week.

Much of the move online will stick. While the art industry has traditionally lagged other consumer sectors, such as luxury and general retail, in adopting technology, the pandemic forced galleries and auction houses to invest in digital tools like online viewing rooms. Crypto art platforms such as the Winklevoss brothers-backed Nifty Gateway have also sprung up, engaging younger collectors with limited-edition drops. The odds are good that we’ll continue to consume art on our phones and laptops. 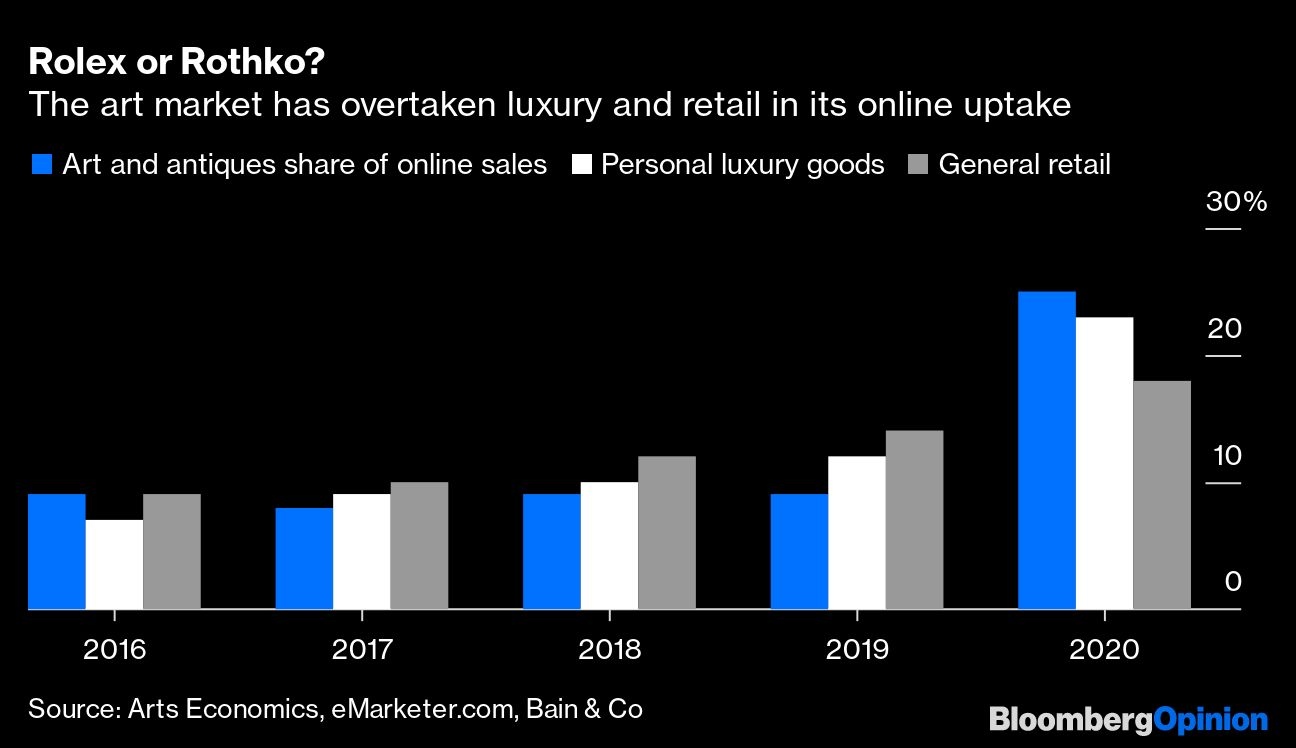 Whether the wealthy maintain their appetite for art when travel and entertainment opens up remains to be seen. There’s also a question as to whether younger consumers will keep on buying. But with markets and cryptocurrencies still soaring, and opportunities to spend still mostly limited for much of this year, the tailwind should continue. Savvy companies such as Christie’s will hope to profit from future Beeples as much as they do from Francis Bacons.