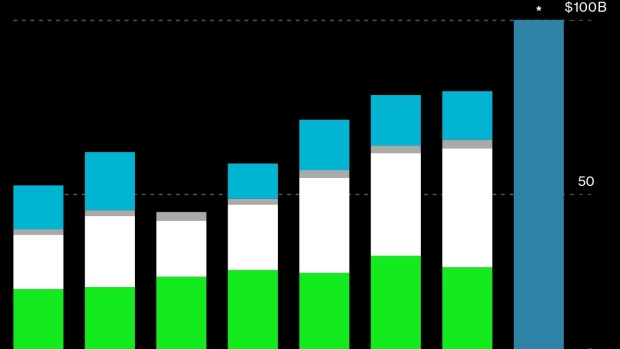 (Bloomberg) -- Developed countries made almost no progress toward their goal of providing $100 billion a year to help poor countries tackle climate change, figures from the OECD showed on Friday.

The data threaten to undermine crunch United Nations climate talks that start in Glasgow, Scotland, in just weeks. Developing nations say the funding -- which has never hit its annual target -- is key for them to pledge deeper emissions cuts that would help achieve the Paris Agreement’s goal of limiting global warming to 1.5 degrees Celsius compared with pre-industrial levels.

Total climate finance provided and mobilized by rich countries for developing nations was $79.6 billion in 2019, an increase of just 2% from 2018, the Organisation for Economic Co-operation & Development said. It would require a more than $20 billion annual jump to meet the funding goal for 2020 alone. But the rate of annual increases has only slowed over the years.

In 2009, developed countries promised to mobilize $100 billion a year by 2020 in climate finance, and that goal was reiterated again in 2015 as part of the Paris accord. But that target has been missed, in part because former U.S. President Donald Trump pulled the world’s richest polluter out of the deal.

As a result, his successor Joe Biden is under pressure to find more cash, while more than 70 countries, including China and India, have failed to come up with more ambitious emissions targets for 2030.