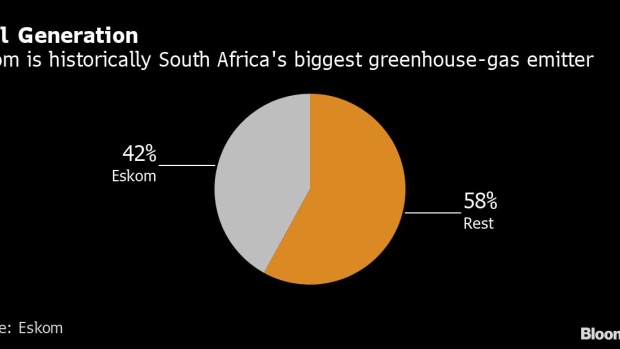 Coal delivery trucks queue at a weighbridge at the Goedehoop coal mine, operated by Anglo American Plc, in Mpumalanga, South Africa, on Tuesday, Jan. 12, 2021. In South Africa, for decades almost all the electricity needed to power Africa’s most industrialized economy has been produced by a fleet of aging coal-fired plants constructed alongside the mines to the east of Johannesburg. Photographer: Waldo Swiegers/Bloomberg , Bloomberg

Envoys from some of the world’s richest nations met with South African cabinet ministers on Tuesday to discuss a climate deal that could see billions of dollars put toward ending the country’s dependence on coal.

The delegation is trying to hammer out an agreement that can be announced at the COP26 climate talks, which start in Glasgow, Scotland on Oct. 31, two people familiar with the talks said. The discussions with South Africa -- the world’s 12th-biggest emitter of greenhouse gases -- include representatives from the U.S., U.K., Germany, France and the European Union.

While South Africa is under pressure to cut its dependence on coal -- which accounts for more than 80% of its power generation -- it needs finance to facilitate the transition to cleaner energy. Developed nations may also need to find away to address the challenges faced by South Africa’s state-owned power utility, which is burdened by 400 billion rand ($27 billion) of debt.

The envoys met Tuesday with South African ministers including Pravin Gordhan, the public enterprises minister whose portfolio includes oversight of power utility Eskom Holdings SOC Ltd., Barbara Creecy, the environment minister, and Ebrahim Patel, the country’s trade and industry minister, the people said, asking not to be identified as a public announcement has yet to be made. Talks will be held on Wednesday with South Africa’s politically powerful labor unions, business leaders and the Presidential Climate Change Coordinating Commission, three people familiar with the arrangements said.

The South African ministers pressed for details on what finance was available, but the envoys favor an incremental approach and more commitments from South Africa, the people said. While Gordhan urged support for Eskom, other options such as transitioning South Africa and its car industry toward electric vehicles were also discussed, they said.

Albi Modise, a spokesman for the environment ministry, confirmed that a group of ministers met with the envoys but declined to comment further, saying a statement will be issued later. Richard Mantu, spokesman for public enterprises, referred queries to Modise, and Tyrone Seale, acting spokesman for the South African presidency, said he couldn’t comment immediately. South Africa’s National Treasury didn’t immediately respond to a request for comment.

“South Africa is well positioned to obtain concessional finance both for the country-wide climate transition and the electricity transition in particular,” Gordhan said in a response to queries before the meeting.

Still, the pivot from coal faces opposition within South Africa. Gwede Mantashe, the country’s energy minister, has advocated for the construction of new coal-fired power stations. Mantashe, the former head of the National Union of Mineworkers, is the politically influential chairman of the ruling African National Congress.

The move to reduce South Africa’s reliance on coal comes as Chinese demand pushes prices toward record highs. The dirtiest fossil fuel, which was struggling against cleaner energy sources, is now seeing its biggest comeback ever, complicating international climate talks set to begin in just a few weeks.