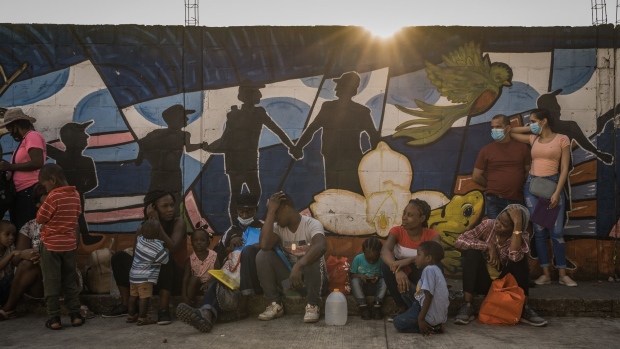 (Bloomberg) -- Osman Ali grew up near southern Somalia’s Shabelle river that was once deep enough for him to dive in for a swim. But in the last three years, droughts have thinned it into a dirty stream. After his sheep and goats were reduced to skin and bones and his corn and sesame crops wilted in the fields, he was left at the mercy of armed extortionists he couldn’t pay.  The 29-year-old sold his family’s land and bought a ticket to Brazil. A two-month-long trudge through jungles, rivers and cities brought him to Tapachula in Mexico,  with hopes of heading to the US southern border.

Like him, Ibrahima Coulibaly was in Tapachula, hanging around in the sweltering heat on a sidewalk outside the city’s immigration office in a yellow Lakers basketball jersey. He left his home near Tambacounda in eastern Senegal when he could no longer farm his five-acre plot of land. A series of droughts destroyed his millet, peanut and bean crops, leaving his family with little to eat and prompting him to sell his 32 head of cattle and embark on a long journey to the Americas. Arriving in Brazil earlier this year and robbed in the Darien Gap — the dense jungle between Colombia and Panama infested with poisonous snakes and bandits — he waited desperately for a permit to continue crossing Mexico to get to the US border.

“At some point leaving is better than staying; you can walk until you drop dead, but you can’t just sit still until you die from hunger,” the 37-year-old said in an interview in April. “Every year is worse than the previous one.”

The number of Africans trying to make it to the US southern border is on track to hit a potential record this year. Coming from the Democratic Republic of Congo, Mali, Senegal, Ghana, Somalia and elsewhere, many are escaping livelihood-destroying climate events. The continent they’re fleeing is facing natural disasters at a faster rate than the rest of the planet, and is largely unprepared to deal with them. Africa, which has done the least to cause the global climate crisis — producing just 4% of the world’s greenhouse gas emissions — is being hit by record storms, floods and droughts as the earth heats up. That’s driving millions to migrate, mostly to urban slums on the continent but also to Europe and the US.

By 2050, 86 million Africans, or about 6.6% of the region’s 1.3 billion people, will be forced to migrate by climate change, the World Bank estimates. That’s on top of those fleeing conflicts and persecution — often linked to climate-related skirmishes over scarce resources. And with Africa’s population expected to double by 2050, those numbers can only rise.

The vast majority of climate victims migrate to other parts of their own country or spill into a neighboring nation, but those who can scrape together some funds venture farther afield.  With over 4,500 Africans crossing the Colombia-Panama border between January and April this year, according to the International Organization for Migration, they have become the second-largest group — after Latin Americans — to try to get to the US border. And although Europe has tightened controls, in the first two months this year, over 89,000 people crossed the Sahara desert in northern Niger, according to the IOM. A large majority were on their way to — or returning from — Algeria and Libya, the well-worn path to Europe, with nine out of 10 people the IOM spoke to citing climate change as one of the reasons for why they were leaving.

“People are like ‘OK, I can’t live here, I may as well die trying to get somewhere else,’” said Ayaan Adam, chief executive officer of AFC Capital Partners, the unit of the infrastructure-focused Africa Finance Corp. that’s raising $500 million for a climate-resilience fund this year. “This is happening now. We are seeing a preview of the movie that will unroll and that will be increasing in intensity.”

Helping Africans stay home by making the continent sustainable carries a hefty price tag —  $1 trillion to “climate-proof” the infrastructure it needs, which itself would cost $2.3 trillion, Adam estimates. China, the US and Europe, which collectively produce more than 50% of the world’s emissions, need to help finance this effort, African leaders say.

“This is not a donation, this is a cleaning fee,” Malawi’s President Lazarus Chakwera said at COP26 in Glasgow in November.

Richer countries can limit refugees at their borders by helping the continent adapt to climate change, said Lisa Lim Ah Ken, a migration and climate change specialist for east Africa at the IOM.

“Developed nations spend huge national budgets on building walls and creating and policing immigration policies that prevent migration, yet if those budgets were invested in the nations and communities who are suffering from the effects of climate change, supporting their sustainable development, then perhaps forced migration would be reduced,” Lim Ah Ken said.

It’s been more than a decade since rich countries committed to help the world’s poorer nations cut emissions and adapt to climate change with up to $100 billion a year. They have yet to meet that target.

African leaders estimate that adapting to climate change — by fortifying coastlines against rising sea levels, fighting desertification and building climate-resilient roads and bridges — would require an annual $33 billion, Patrick Verkooijen, chief executive officer of the Global Center on Adaptation, or GCA, said in an interview from Rotterdam. While the countries can raise $6 billion themselves, they’re only getting another $6 billion in aid, he said.

“This is a must have, not a nice to have, for Africa,” Verkooijen said, adding that adaptation finance will be a key focus of the COP27 climate summit in November in Sharm El-Sheikh, Egypt.

The climate-adaptation money currently flowing in is too insignificant to make a difference. The African Development Bank has a fund with contributions from Europe and Canada, but has disbursed just $8 million for small operations in 16 countries. One ambitious project — the Great Green Wall initiative aimed at halting desertification by planting trees across the width of Africa — has received pledges of over $19 billion from organizations across the globe. But progress has been slow.

Extreme weather events have exploded in Africa. The Horn of Africa is currently dealing with the worst drought in at least four decades, putting 16 million people across Kenya, Ethiopia and Somalia at risk and raising the specter of a famine. In May, South Africa’s deadliest floods in almost three decades triggered landslides that killed 435 people and destroyed thousands of dwellings.

The number of floods in Africa has jumped five-fold since the 1990s, according to GCA. In 2020, the most severe flood in Sudan in 60 years displaced more than 500,000 people. In 2019, two of the strongest cyclones ever recorded hit east Africa. Cyclone Idai destroyed 90% of the homes in the city of Beira in Mozambique and damaged 1.4 million hectares (3.6 million acres) of arable land in Zimbabwe. That was followed by Cyclone Kenneth. Together, they killed 1,300 people and affected the lives of 3.5 million more.

The floods that followed the cyclones provoked the worst locust infestation in a quarter century, leaving 9.6 million people in Sudan without enough food and driving thousands of farmers in Somalia to migrate. Africa loses 4 million hectares of forest each year to land degradation, Lake Chad has shrunk by 90% in the last 40 years and the glaciers on Mount Kilimanjaro are melting.

“Climate change impacts are costing African economies between 3% and 5% of their GDPs,” South African President Cyril Ramaphosa told the African Union on Feb. 6. “Despite not being responsible for causing climate change, it is Africans who are bearing both the brunt and the cost. The necessary financial flows to enable developing-economy countries in particular to mitigate and adapt to the impacts of climate change remain vastly inadequate.”

African leaders haven’t helped, treating climate-driven problems as a “peripheral issue,” said Saliem Fakir, executive director of the African Climate Foundation. “Governments treat it as an environmental issue largely to be supported by donor assistance and not really integrated into the economic debate.” Poor planning, deforestation and the misuse of developmental funds have made matters worse.

In an index of 182 countries assessed by the Notre Dame Global Adaptation Initiative for climate-change vulnerability, the bottom seven are African. That comes from the continent’s overwhelming dependence on subsistence farming. About half of Africa’s population relies on agriculture. In the eastern parts of the continent, that number rises to 70%. There’s little irrigation, leaving farmers at the mercy of rain.

For many potential climate refugees, poor crops are where their migration journeys start. Mouhoumoudane Mohamed, 34, from a village in the Agadez region in Niger, left for Algeria in 2019, hoping to make it to Europe.

“One bad harvest followed another; the meager crops that you could squeeze from the soil weren’t enough,” Mohamed said. “The problem in Agadez is the lack of water. When it rains, it’s never enough. Or it’s too heavy and destroys the crops.”

He failed, and is back in Agadez, holding off trying again — for now.

A record 4.3 million people were displaced in 2020 in Sub-Saharan Africa alone due to weather events and conflicts, GCA estimates. Migration within the continent creates problems of its own. Desperate farmers moving to greener pastures cause conflict with communities already there. Also, with few opportunities, youths are joining Islamist militants — providing fodder for groups that Europe and the US are trying to fight.

Africa’s rapidly growing cities, to which many of the continent’s poor gravitate, are seeing climate-related problems of their own. About half of Africans now live in cities, and the urban population is expected to nearly triple by 2050, according to GCA. Seventy-nine African cities, including 15 national capitals, are at extreme risk of climate change, according to Catlyne Haddaoui, a global policy and research manager at the Washington-based Coalition for Urban Transitions.

“An increase of 2 degrees Celsius in average world temperature doesn’t have the same effect in Nigeria as it does in the US where you have air conditioning from your car to your office to your house and everywhere,” Haddaoui said. “It would be way more difficult to deal with in Africa and way more deadly.”

With extreme weather only likely to intensify and drive more people to migrate, “developed countries have both a responsibility and an interest in helping some of the most vulnerable countries,” said Taylor Dimsdale, director for Risk and Resilience at E3G, a climate think-tank.

It might stop migrants like Ali from knocking at their doors. The Somali farmer waited in Tapachula, about 900 miles from the nearest US border, to make the final stretch of his journey to America. With climate change destroying his livelihood, he’s keen to start over elsewhere.

“We depend on the rain and the river, but there was no water,” said Ali. “We lost everything.”