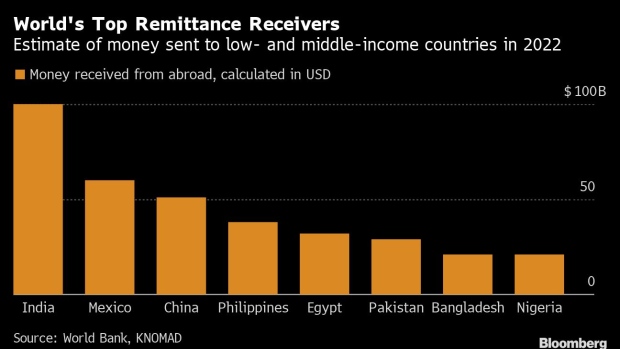 Commuters wait in line to board a bus in San Salvador, El Salvador, on Tuesday, July 19, 2022. El Salvador's gamble on Bitcoin is exacerbating a debt crisis in the financially troubled country, which has been struggling to deal with wide fiscal deficits as an $800 million bond comes due in January. , Bloomberg

(Bloomberg) -- Slower growth in the world’s richest economies will limit the ability of migrants to send money home to their families next year, according to a report by the World Bank Group.

Remittances to low-income and middle-income countries will grow 2% in 2023 to $639 billion, down from 4.9% growth this year, according to the bank’s forecast.

That’s bad news for economies in Central America, the Caribbean, Africa and parts of Asia that are heavily reliant on remittances. El Salvador, Nepal and Lebanon are among the countries where such transfers account for more than a fifth of gross domestic product.

Inflation in items such as food and fuel is making life more expensive for migrants, which also curbs their capacity to send money abroad.

“With high food inflation, and the fact that the stimulus packages announced by different countries are also waning now, the cumulative effects will be felt in 2023,” Dilip Ratha, head of the Global Knowledge Partnership on Migration and Development, a World Bank project, said in a phone interview. “That is why we are expecting a very sharp slowdown.”

Latin America will experience the fastest remittance growth of any region in 2023, at 4.7%. The expansion in US construction and hospitality boosted employment and helped immigrants send money back home this year, the report found.

This year, remittances to Europe and Central Asia soared by more than 10% as the strong ruble helped workers in Russia send more money out. Flows from Russia to neighboring countries are also likely to increase in 2023, as some Russians move their families or their businesses abroad following their country’s invasion of Ukraine.

Indians will send the most money home this year -- around $100 billion -- followed by the workers from Mexico, China, the Philippines and Egypt. More people are expected to migrate worldwide, potentially becoming contributors to remittance flows, and the cost of their travel has already been reflected in a boost of cash inflows to transit countries such as Mexico.