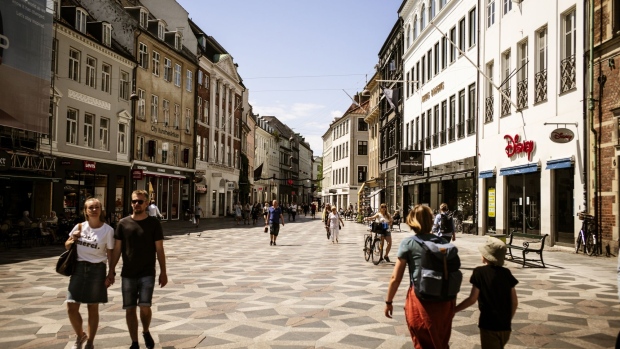 Pedestrians walk along a pedestrianized shopping street in Copenhagen, Denmark on Tuesday, June, 16, 2020. Denmark's central bank warned of the risk of a slow recovery from the historic recession triggered by Covid-19. Photographer: Carsten Snejbjerg/Bloomberg , Bloomberg

(Bloomberg) -- Nordic retail investors have found a new place to put their money, after years of ultra-low interest rates left them holding a lot more cash.

Record amounts of money have poured into the smallest companies listed on Nordic exchanges, according to data provided by Nasdaq. Bjorn Sibbern, head of European markets at Nasdaq, says the trend marks a departure from the last financial crisis, when retail investors flocked to the biggest, best known firms.

“What we have seen now is very good liquidity in both large caps and SMEs,” Sibbern said. “Even better liquidity, in fact, than during the financial crisis.”

“We’ll continue to see relatively high liquidity in small caps, also the rest of the year,” he said. That “was not the case during the financial crisis.”

The development is visible in data tracking turnover for the Nordic exchanges, which in June was about 30-40% higher in Copenhagen, Stockholm, Finland and Iceland than normal. In the immediate wake of the coronavirus pandemic, volumes on the exchanges peaked at double the usual level. Nasdaq even had to extend its opening hours to accommodate the increase.

Nasdaq says that in recent months activity was highest in small and mid-sized companies. Volumes, measured by the number of trades, rose about 63% in the six months through June, it said. That’s about 10 percentage points higher than trading in larger firms.

Sibbern says Nasdaq doesn’t expect turnover levels to return to normal until the fourth quarter, though that depends a lot on how volatile things get, and how the pandemic plays out.

Ironically, investment in Nordic small caps has soared despite a decline in research. Market rules adopted a few years ago to improve investor protections required research to be priced separately from trading.

But since the Markets in Financial Instruments Directive (MiFID II) was introduced in 2018, there’s evidence it’s led to less analysis of smaller stocks. Authorities are now debating potentially revisiting the rules.

“We need to have analysts looking at small-cap companies,” Sibbern said. “We’ve seen that there are now fewer analysts covering these companies.”