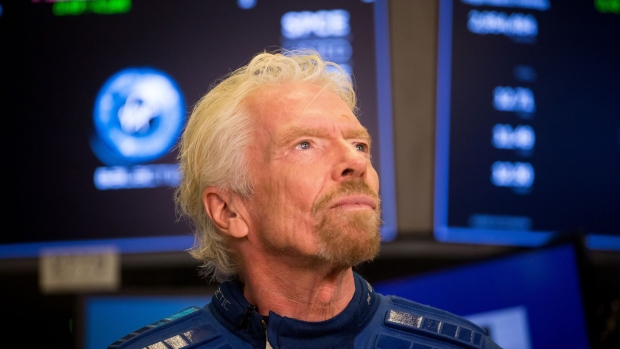 (Bloomberg) -- Richard Branson is the latest billionaire to join the blank-check listing party after he sold his space tourism business to one.

VG Acquisition Corp. filed Wednesday to raise $400 million in a special purpose acquisition company, or SPAC. The company plans to sell 40 million units at $10 apiece, according to its filing with the U.S. Securities and Exchange Commission.

The company said it would look at a host of businesses to target for a merger. The possibilities could be as varied as travel, financial services, music and renewable energy. it said.

Branson, founder of the VG Acquisition, sold Virgin Galactic Holdings Inc. in October to a blank-check company started by Chamath Palihapitiya and venture capital firm Hedosophia in a deal that set off this year’s SPAC listing spree.

Branson and the management of VG Acquisition bought 11.5 million shares or 20% of the shares outstanding for $25,000 in a common payout known as founder shares or promote -- a compensation to sponsors for finding a deal.

Investment heavyweights like Bill Ackman have since set up their own SPACs. The $4 billion initial public offering by Ackman’s SPAC in July is the largest ever by a blank-check company.

Credit Suisse Group AG is leading the offering by VG Acquisition. The company plans to list its units, consisting of one Class A ordinary share and one-third of a redeemable warrant, on the New York stock exchange under the symbol VGAC.U.