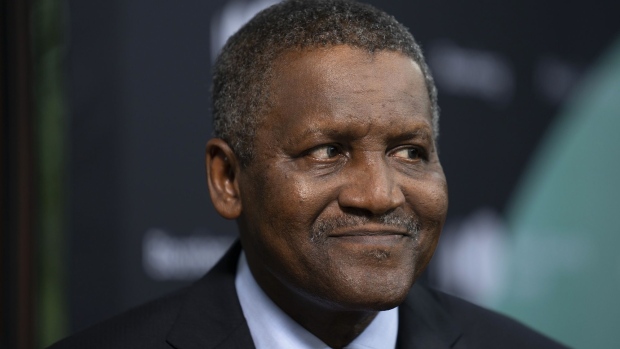 Aliko Dangote, president and chief executive officer of Dangote Group, listens during a Bloomberg Television interview on the sidelines of the Bloomberg New Economy Forum in Singapore, on Tuesday, Nov. 6, 2018. The New Economy Forum, organized by Bloomberg Media Group, a division of Bloomberg LP, aims to bring together leaders from public and private sectors to find solutions to the world's greatest challenges. , Bloomberg

(Bloomberg) -- Aliko Dangote, the richest man in Africa, is on track to close the year at the richest level he has ever been since 2014 buoyed by the second straight year of gains at his cement unit.

The rising share price of his Dangote Cement Plc and higher oil and fertilizer prices helped boost the 64-year-old Nigerian businessman’s wealth by as much as $2.3 billion this year to $20.1 billion as of Dec. 3, the richest he has been since 2014 according to the Bloomberg Bilionaires Index. The highest his wealth has touched on the index was $26.7 billion in June 2014.

Robust cement demand and rising prices of the construction material in Africa’s biggest economy have helped boost revenue at Dangote Cement, the tycoon’s main asset. Dangote is also poised to complete a $19 billion refinery that has the capacity to more than meet Nigeria’s fuel demand, which is currently met by imports.

Dangote, this year, also started exporting fertilizer to the U.S. and Brazil after the completion of a plant with a capacity to produce 3 million tons of urea and ammonia annually.

Born into a wealthy Muslim family of traders in the north, Dangote incorporated his own business selling cement at 21. He shifted to manufacturing the building material in the 1990s, helped by government policies that encouraged ways to reduce the need for imports.

Critics accuse him of taking advantage of his closeness to the government to gain an unfair market advantage, a claim he has repeatedly dismissed. Nigeria’s state oil firm in June announced plans to acquire a 20% stake in the Dangote refinery.