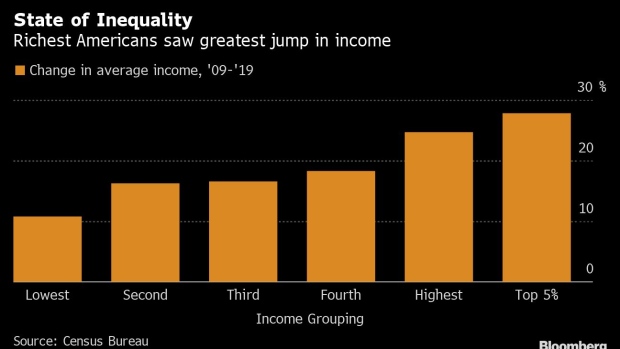 Over the past decade, during an economic expansion that benefited most Americans, the richest made out the best.

The top 5 per cent of households -- those making US$451,122 on average last year -- have seen their inflation-adjusted incomes jump 28 per cent since 2009, according to annual figures published by the Census Bureau on Tuesday.

The report underscores just how endemic poverty is in America, even in times of economic expansion. While incomes have increased, so has the cost of living, with consumer prices rising 20 per cent since 2009.

The latest figures showed the fortunes of lower-income Americans were improving just before the pandemic struck. In 2019 the bottom 20 per cent saw income grow 9 per cent from the previous year, the fastest annual gain among all the groups. But their average income was still less than half of households in the next group.

Census officials attributed the broader gain in household income, among the best ever recorded, to increased employment and wages -- for example, unemployed people in households who got jobs. The data also showed that the highest-paid Americans reaped the majority of the income gains.