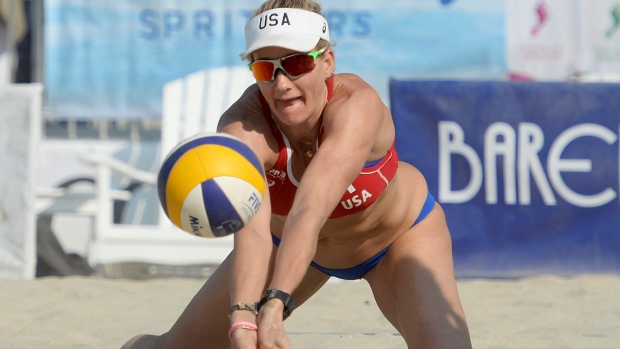 The company’s name is based on the three-time gold medalist’s mantra of living all 1,440 minutes of the day with passion and purpose. Gouw saw that firsthand as a graduate student and volleyball fan at Stanford University, where Walsh Jennings starred as an undergraduate.

“She’s a legend and has always been an inspiration,” Gouw said. “Whether it’s p1440 or a software startup, I’m investing in people. And I was also drawn to the fact that we need more women founders to show the world what can be possible.”

Neither Walsh Jennings nor Gouw would disclose specifics of her personal investment.

Walsh Jennings envisions p1440 mushrooming into a global lifestyle brand and resource for all things beach volleyball. She said money is only a small part of what Gouw brings to the year-old venture, which streams live competitions via its mobile application and website, and offers coaching and health and wellness resources.

“Theresia is in financially, and she’s incredibly committed regarding her time and vision, which is priceless,” Walsh Jennings said via telephone from Portugal, where she was competing in the FIVB Beach Volleyball World Tour. “It’s about the resources Theresia brings, the connections.”

That network includes, for instance, Melinda Gates, a vociferous critic of the gender gap in venture capital who last year made an investment in a fund run by Aspect Ventures.

According to the Sports & Fitness Industry Association, there are 4.8 million beach volleyball players in the U.S., and 6.3 million court volleyball players. Digital distribution to fans glued to their mobile phones and tablets will allow p1440 to reach what Gouw said are 900 million global volleyball participants.

Gouw knows a thing or two about the power of digital, social media and scale. Prior to founding Aspect Ventures in 2014, she was the first female partner at Accel, which was one of Facebook Inc.’s (FB.O) first venture investors. She landed last year on Forbes magazine’s list of self-made women, with an estimated net worth of US$500 million.

Walsh Jennings said it’s paramount to keep volleyball and its culture top-of-mind outside of the quadrennial Olympic cycle. “Our sport had been so popular, but so underserved for so many years,” she said.

P1440 will use the investment capital to create more content, like tutorials and fitness videos, as well as to obtain live rights, Walsh Jennings said. The venture has until now been self-funded by Walsh Jennings and three managing partners, including her volleyball-playing husband. She declined to speculate on when it would be profitable.