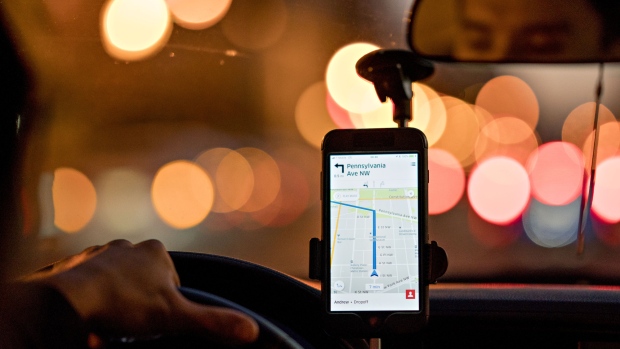 A driver uses an Uber Technologies Inc. car service app on a mobile device while driving in Washington, D.C., U.S., on Wednesday, Nov. 29, 2017. Uber Technologies Inc.’s net loss widened to $1.46 billion in the third quarter, according to people with knowledge of the matter, as the ride-hailing leader struggled to fend off competition, legal challenges and regulatory scrutiny. , Bloomberg

VICTORIA - The British Columbia government has set up a of series rules and regulations as it opens the door to riding hailing applications for the service on Sept. 3.

There's no exact day when riding hailing could start in the province and opinion varies from mid-September to as late as the end of the year.

New Democrat Bowinn Ma, who heads an all-party committee that deals with ride hailing, says the service could start by year's end, while a Transportation Ministry bureaucrat says the companies could be approved to operate as early as Sept. 16.

The government says an annual inspection is needed if the vehicle has logged 40,000 kilometres in the previous year, vehicles can't be older than 10 years and illegal operators could face fines of $100,000.

Ma says regulations about fares and routes will come later this summer.