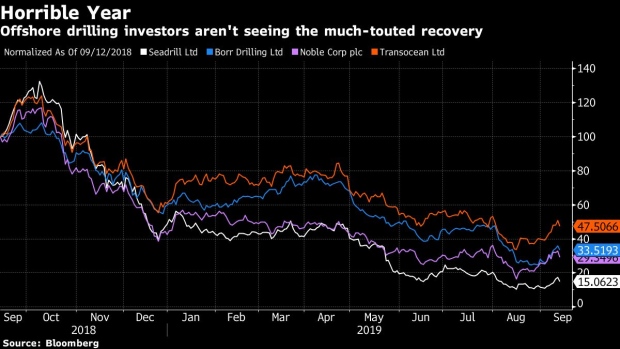 The Apollo offshore support vessel, operated by Dredging Environmental & Marine Engineering SA (DEME Group), sits at anchorage in the Port of Cromarty Firth in Cromarty, U.K., on Thursday, April 25, 2019. Only about a dozen ships in the world can install a wind turbine. Photographer: Matthew Lloyd/Bloomberg , Bloomberg

(Bloomberg) -- Offshore drilling executives are trying to win back investors who have fled their stocks over the past year, insisting that a protracted recovery is gaining momentum.

After suffering their worst downturn ever following the collapse of oil prices in 2014, rig companies started regaining hope as crude recovered three years later, bolstering the coffers of the oil companies that pay for their services. But the improvement to the offshore drilling market has been much slower than anticipated, weighing on an industry with too many rigs and too much debt.

As oil tumbled again in late 2018 and in recent months, offshore drilling stocks took a severe beating. Everyone in oil services has had an “absolutely horrible year,” Pareto Securities AS head of investment banking Tormod Hoiby said on Wednesday at the opening of the firm’s annual Oil & Offshore Conference in Oslo, where company representatives meet with investors.

Still, rig executives were adamant the market is improving and that their valuations present an investment opportunity.

With almost $6 billion of bank debt remaining, Seadrill is a “leveraged play,” but it’s “where you want to be” if you believe in the business, Dibowitz said. After pushing the earliest maturity to 2022, the company has time to wait for the recovery, he said.

Another driller with significant debt, Noble Corp. Plc, is in a “very good position to weather the storm,” CEO Julie Robertson said. Day rates for deepwater drillships may rise to $250,000 by the end of the year from up to $200,000 now, and “the fundamentals are much better,” she said, even as she acknowledged sounding like a “broken record.”

For shallow-water jack-up rigs, rates have doubled since early 2018 to about $100,000 a day. The market is especially favorable to modern machines like the ones operated by Borr Drilling Ltd., chief financial officer Rune Magnus Lundetrae said at the conference.

“Interesting enough, now that we have rigs in operation and we actually make some money and day rates are going up, the share price is going down,” the CFO said. “So you decide if this is an opportunity or if this is sort of a conclusion that this is not working.”

The stock market’s cold shoulder is understandable, conceded both the CEOs of Seadrill and Pacific Drilling SA, another company that emerged from Chapter 11 last year. After being “burnt three times” in successive market drops since the downturn started, investors want to see evidence of higher day rates, Pacific’s CEO Bernie Wolford said in an interview.

“As an industry we’ve let down equity investors over and over again, saying ‘the recovery’s going to be next year,’” Dibowitz said. “They actually want to see us starting to deliver cash flow. And they also want to see us as an industry start acting more rationally, being disciplined.”

While Borr intends to pay shareholders back with dividends, CFO Lundetrae declined to say when that might be. Even Odfjell Drilling Ltd, one of the stocks that has performed best during the downturn thanks to its exposure to the healthier market segment of floating harsh-environment rigs, doesn’t intend to start payouts until 2021 or 2022, its CEO Simen Lieungh said at the conference.

Investors’ growing interest in renewable energy over the past year is another cause for concern in the oil services industry, Pareto’s new CEO Christian Jomaas said. Yet investments in offshore oil will rise in parallel with global crude demand in the coming years, he said.

“There’s a lot of people who take the view that this industry will crumble,” he said in an interview on Thursday. “We don’t believe that.”

To contact the editors responsible for this story: James Herron at jherron9@bloomberg.net, Christopher Sell, Helen Robertson