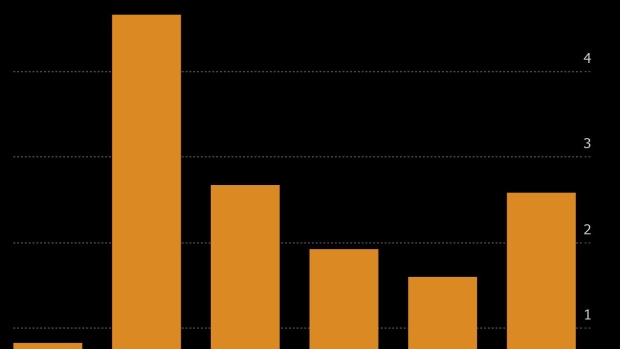 Shares in the meal-kit subscription service are up 40% since Wednesday’s announcement that it will raise $78 million -- a windfall worth more than half of its market capitalization. The capital will come by way of a rights offering and a pair of private placements. A rights offering is a way to raise equity capital from existing shareholders in proportion to their existing stake.

This alternative to a traditional sale of equity may not be dilutive because shareholders have the option to participate. It’s growing in popularity as companies look to fund their way through the pandemic’s second year. U.S.-listed companies have announced more than $2.5 billion of rights offerings in 2021, according to data compiled by Bloomberg, the most in three years.

More typical in other areas of the world, rights offerings can come into vogue among U.S. firms during periods when there is an excess of distressed balance sheets that weigh on valuations, said Anna Pinedo, co-leader of Mayer Brown LLP’s capital markets practice.

“I would say it’s more episodic than indicative to a real change in norms,” she said in an interview. “We generally see rights offerings come in clusters, oftentimes from a number of companies in the same sector -- or all midcaps. Then the market stabilizes and there are more predictable trends, so companies revert to the norm and do traditional follow-ons.”

The current renaissance in U.S. rights offerings is part of a broader wave of equity issuance that began when the market rebounded from its pandemic lows in 2020. The stock sales frenzy escalated this week with first-day pops for the first initial public offerings that followed Labor Day, plus tens of billions raised through traditional secondary offerings.

By selecting a rights offering, Blue Apron also may have avoided the fees and discounts associated with traditional stock sales. Its deal was fully backstopped -- meaning the company had already secured commitments to buy the equity -- a strategy that’s also becoming more common due to the certainty it provides the market. Blue Apron’s structure of combining the offering with private placements is also the latest in a trend.

“Often, the success of the rights offering is tied to whether there is a backstop bidder because it gives the market a whole lot more confidence the offerings are going to be successful,” Pinedo said. “Rights offerings that supplement the amount raised in a private placement helps mitigate any risk that existing stockholders feel deprived of the opportunity to participate in the placement.”