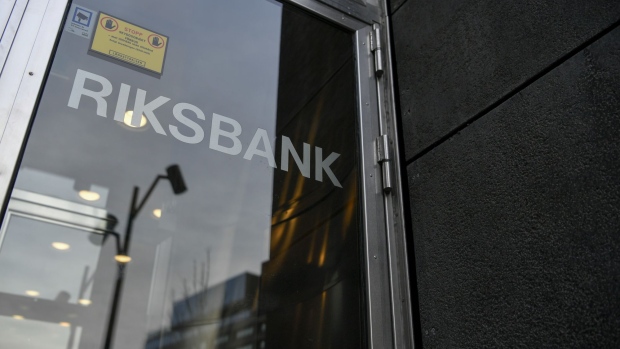 A sign on an entrance reads Riksbank at the headquarters of the Sveriges Riksbank headquarters in Stockholm, Sweden, on Thursday, Dec. 19, 2019. Sweden's central bank ended half a decade of subzero easing in a move that will provide relief to the finance industry and a test case for global counterparts experimenting with negative borrowing costs. Photographer: Mikael Sjoberg/Bloomberg , Bloomberg

The Riksbank expects to start hiking interest rates in 2024, the first sign from the Swedish central bank that it sees an end in sight to its ultra-loose monetary policy.

While policy makers kept their benchmark unchanged, they also signaled for the first time that they see a case to move higher within three years. Previously they said the rate was likely to remain at zero for the foreseeable future.

In another facet to its policy, the central bank said it plans to keep the size of its balance sheet largely unchanged next year, before tapering in 2023. Sustaining its level will require continued reinvestments as officials scale back asset purchases used to support economy during the pandemic.

The decision underscores how the Riksbank is taking one of the most sanguine views of surging inflation among advanced-economy monetary authories, just as Sweden experiences annual price growth at its highest level in 13 years.

While that spike in consumer costs has prompted a debate about the appropriate response, the majority view among policy makers remains that inflation will slow down next year.

The Riksbank still slightly raised its forecast for price increases in 2022. It expects average inflation to remain just above its 2% target.

“Economic activity is strong and inflation has risen rapidly, largely driven by rising energy prices,” the central bank said in a statement. “With this monetary policy, inflation is expected to be on target going forward.”

Sweden’s economy has fared better than most rich peers’ during the pandemic. While many other European nations are seeing Covid hospitalizations soar again, it has so far been largely unscathed by the latest wave of infections.

Nevertheless, the Riksbank noted a resurgence of the pandemic and said supply-chain bottlenecks are “creating headwinds for growth in the short term and.”

All economists surveyed by Bloomberg expected the Riksbank to leave the benchmark rate at zero, but a cautious signal of a rate hike on the horizon was anticipated.