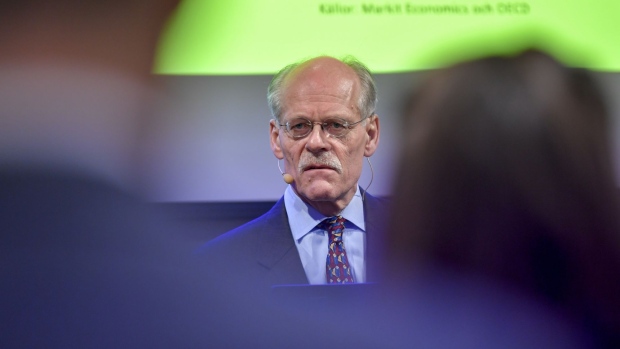 Stefan Ingves, governor of the Sveriges Riksbank, pauses during a news conference at the Swedish central bank headquarters in Stockholm, Sweden, on Thursday, Dec. 19, 2019. Sweden's central bank ended half a decade of subzero easing in a move that will provide relief to the finance industry and a test case for global counterparts experimenting with negative borrowing costs. , Bloomberg

(Bloomberg) -- The Swedish parliament’s committee on finance will summon Riksbank Governor Stefan Ingves after revelations about his stock holdings in companies whose corporate bonds the central bank has bought, Svenska Dagbladet reports.

The committee wants to discuss potential changes to the bank’s policies on trading and security ownership with Ingves, chairperson Asa Westlund told the newspaper. Westlund didn’t immediately return Bloomberg phone calls seeking comment and a Riksbank spokesman had no further information on the hearing.

Svenska Dagbladet and Bloomberg News reported Monday that Ingves and his first deputy governor own shares in Swedish companies firms whose corporate debt is eligible for acquisition under a quantitative-easing program unveiled amid some controversy last year.

The Riksbank’s current rules don’t prohibit the ownership of shares by executive board members, but the bank has launched a review of its guidelines, after a routine check earlier this year unearthed unethical transactions.