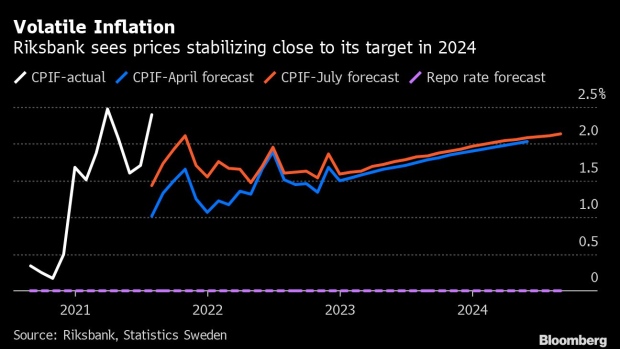 Sweden’s central bank will this week reveal if a buoyant economic recovery and inflation that is heading toward the fastest since 2008 are reason enough to bring forward plans for tightening monetary policy.

Economists don’t expect the Riksbank to change its interest rate on Tuesday, while investors are focusing on whether officials reckon the benchmark, now at zero, should increase by the third quarter of 2024. They have so far indicated no change by then.

The central bank is currently tapering its 700-billion-kronor ($80 billion) asset-purchase program, and earlier unwinding of that hoard is also possible.

In contrast to neighboring Norway, which is poised to raise rates this week, the Riksbank has been one of the more dovish central banks in the advanced world until now. Officials have insisted Sweden’s inflation spike is temporary, with the delta variant of the coronavirus still clouding the outlook in the biggest Nordic economy.

“We think that the board is coming closer to signaling some probability of a rate hike at the end of the forecasting horizon,” SEB strategists Olle Holmgren and Lina Fransson said in a research report. Still, “we think the board will wait for more confirmation that the recovery is on track.“

Swedish fixed-income investors are split on the outcome of the decision. A majority of 58% reckon the Riksbank will keep the same outlook for its key rate throughout the forecasting period, while about 38% predict the rate path will indicate some probability for a hike, according to according to a survey by SEB released Monday.

Last month’s faster-than-expected jump in Swedish inflation to 2.4% has added fresh fuel to bets that the Riksbank could shift its position. Price growth may sail above 3% in the coming months, which would be the highest level since 2008, Swedbank said on Friday.

The export-driven economy continued to beat growth expectations in July, backed by spending on hotel and restaurant services. Sweden has recovered its pre-pandemic output much faster than most industrialized nations.

Riksbank Governor Stefan Ingves has still shrugged off a surge in commodity prices and cost pressures from supply bottlenecks as temporary.

Adjusted for energy prices, the inflation rate targeted by the central bank, CPIF, was at 1.4% in August, below its five-year average. A housing rally is fizzling out, also reducing the pressure on Riksbank.

“There has been a pickup in hawkish bets ahead of the Riksbank rate decision on Tuesday, but we think risk/reward favors a dovish outcome,” Nordea economists Kjetil Olsen and Dane Cekov said in a report. “Ingves is unlikely to be swayed from his current course by somewhat improved growth estimates and a high inflation outcome.”