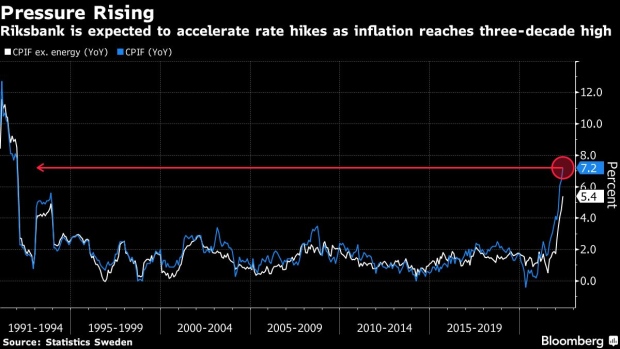 Stefan Ingves, governor of the Sveriges Riksbank, gestures while speaking during a news conference at the central bank in Stockholm, Sweden, on Thursday, Dec. 20, 2018. For the first time in seven years, the Swedish central bank has raised interest rates as policy makers took a decisive step away from an historic stimulus program. , Bloomberg

Having only just begun to increase borrowing costs with a surprise move at the end of April, the central bank is now poised to accelerate. Economists surveyed by Bloomberg expect a half-point hike to 0.75%, following the previous shift to 0.25%.

Several forecasters reckon Riksbank officials will also continue tightening at the same pace at the remaining two meetings of the year, bringing the policy rate up to 1.75%.

Such a hawkish tilt would align the Riksbank with global counterparts including the Federal Reserve and neighboring Norway’s central bank, which last week increased its deposit rate by 50 basis points -- its biggest hike in two decades.

The pivot in policy suggests officials led by outgoing Governor Stefan Ingves will be prepared to countenance a corresponding hit to economic growth, with potential fallout on Sweden’s fragile housing market.

“The rise in underlying inflation is broad and significant,” Swedbank’s Knut Hallberg and Pernilla Johansson said in a report. “We believe that the Riksbank will therefore find it necessary to front-load its rates hikes to mitigate the risk of secondary effects.”

Swedish inflation has consistently exceeded the central bank’s expectations. It has turned out largely in line with an alternative scenario that the bank published in April, showing how it would respond by taking rates higher to curb consumer prices and avoid a wage-price spiral.

That projection also suggested an impact on growth, described at the time as “greater strains for the real economy.” Forecasters have slashed predictions in recent weeks, and the central bank is expected to follow suit.

“In April, the Riksbank blazed a trail for central banks when it openly forecast that growth and housing prices will be significantly dampened by the tightening of monetary policy,” Handelsbanken’s Johan Lof said in a report. “Now the Riksbank will likely take the next step and downgrade its already below-consensus growth forecast.”

Sweden’s housing market has come into particular focus as rate hikes are making life more costly for borrowers. Decades of virtually uninterrupted increases in home values have led to a substantial buildup of debt, stoking fears that the market is teetering on the brink of collapse.

In May, housing prices dropped the most since the pandemic started, and they continued falling this month, according to Valueguard, which compiles the HOX housing-price index.

The Riksbank may still need to make a forceful move, especially as weakness in the krona is stoking inflation. That’s pushed some economists to wonder if officials could dare to make an even bigger rate hike than 50 basis points.

Jesper Petersen, a currency analyst at Danske Bank, said that increasing to 0.75% might result in only a short-lived strengthening of the krona against the euro.

A 75 basis-point hike “would be a hawkish surprise” that could strengthen the krona against the euro, Petersen said. “A more aggressive rate path could also lend the SEK some support in coming weeks.”