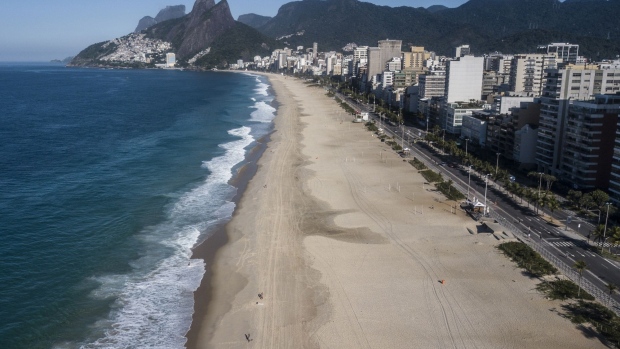 An empty Ipanema beach in Rio de Janeiro, Brazil, on Sunday, March 21, 2021.The city of Rio shut down its beaches over the weekend in an effort to curb the spread of Covid-19, which has already infected more than 12 million Brazilians. , Bloomberg

(Bloomberg) -- A group of veteran equity analysts is launching a new firm in Brazil as they hunt for investment opportunities in Latin America’s largest economy and abroad.

David Kaddoum and Gabriel Saavedra have left Atmos Capital to start TB Capital, which will focus on equity funds, according to regulatory filings. Atmos owns a minority stake in the company, filings show.

Kaddoum and Saavedra spent more than a decade at Atmos, one of Brazil’s most revered equity asset managers. Before joining in 2009, Kaddoum was an equity trader at IP Capital Partners, while Saavedra had a short stint at Dynamo Administracao de Recursos Ltda. Other employees at the newly-launched firm, which is based in Rio de Janeiro, include Thomaz Fraga, Jayme Gurivitz and Benjamin Ruiz-Tagle.

“TB Capital seeks to be an agnostic capital allocator primarily focused in the utilities, infrastructure and technology sectors,” according to a presentation on the company’s website. The firm is still undergoing regulatory processes, its website says.

Kaddoum and Saavedra declined to comment, while Atmos didn’t reply to an emailed request looking for comment.

Brazilian equity funds have seen a net withdrawal of about 49.5 billion reais ($9.7 billion) since the beginning of the year, as locals rotate back into fixed-income products amid rising interest rates. Atmos was among a small group of domestic funds that were able to buck the trend and lure net new money.

The firm’s Atmos Acoes fund is up about 552% after fees since its 2009 inception, compared to a 47% gain for the Brazilian benchmark Ibovespa equity index in the same period, Bloomberg data show.