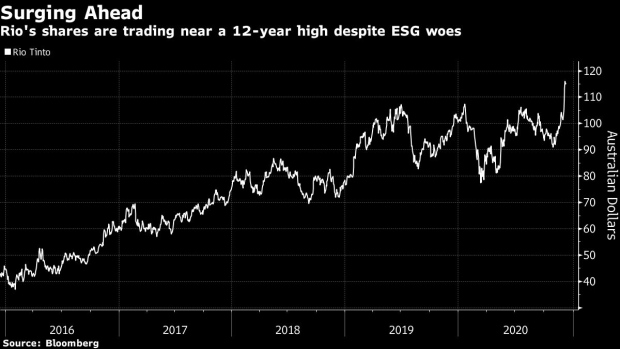 (Bloomberg) -- Rio Tinto Group should to agree a restitution package with traditional landowners over mine blasts this year that badly damaged two ancient Aboriginal heritage sites, Australian legislators recommended in a sweeping report after four months of hearings into the incident.

The inquiry’s interim report called on Rio, and all other mining companies operating in Western Australia, to put on hold any applications under a controversial section of the state’s indigenous heritage law that gives companies with mining rights permission to damage a site. It also advised that the state government replace the law with stronger protections.

“Rio Tinto’s role in this tragedy is inexcusable,” the report said. “Rio knew the value of what they were destroying but blew it up anyway.”

Rio declined to immediately comment on the details of the report as the company studies the recommendations.

Explosions by Rio in May to open up a mining area at an iron ore operation impacted two rock-shelters -- shallow, cave-like structures -- in the Juukan Gorge region of Western Australia’s Pilbara region. The sites, used by Aboriginal Australians for cooking and shelter as long as 46,000-years ago, were among the most significant of their type in the country, according to archaeologists.

Other recommendations included that Rio carry out a full reconstruction of the site, commit to a permanent moratorium on mining in the Juukan Gorge area and undertake an independent review of all its agreements with traditional land owners.

While the blasts were lawful under a state government decision, Rio was accused of failing to act on information that later showed the heritage sites had greater significance than first understood. Chief Executive Officer Jean-Sebastien Jacques was forced to step down in September after investors and legislators criticized the company’s tame initial response to the incident. He will leave his position by March, with two other key executives also leaving.

The 196,000-square mile Pilbara is Australia’s most valuable iron ore region -- hosting a network of major mines that act as a profit engine for companies including Rio, BHP Group and billionaire Andrew Forrest’s Fortescue Metals Group Ltd. It’s also home to Indigenous communities that rank among the nation’s most disadvantaged, an imbalance that’s coming into sharper focus amid a wider investor drive for improved corporate responsibility.

Iron ore is Australia’s top export earner, generating in excess of A$100 billion ($74 billion) in the year to end-June. The country’s top miners are also reaping the benefits of a price surge that has sent iron ore futures toward $150 a ton.

At the same time, they are under increasing pressure from shareholders to bolster their environmental, social and corporate governance mandates and more fully account for their impact on the climate and local environments.

A Rio board review into the company’s practices in protecting areas of cultural significance “did not go far enough,” said Liza McDonald, head of responsible investments at Aware Super, one of Australia’s biggest pension funds, ahead of the inquiry’s interim report.

“Aware Super sees this issue as highlighting broader concerns at Rio Tinto around community engagement and First Nation people engagement, work culture and information flow across the organization and governance,” McDonald said, calling for a broader independent review with input from the Indigenous community.