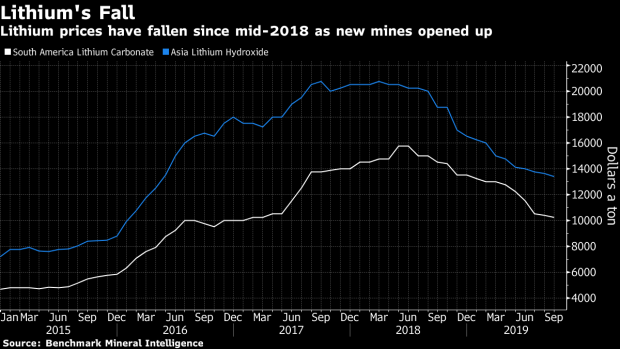 (Bloomberg) -- Rio Tinto Group is starting pilot production of lithium in California and will consider an expansion to become the top domestic supplier in the U.S. as the world’s biggest miners look to boost their exposure to the electric car battery revolution.

Work to reprocess waste piles from a 90-year-old mining site in Boron has successfully produced lithium carbonate -- needed in rechargeable batteries for electric vehicles and consumer technology -- and efforts are now focused on improving quality and lifting volumes, Rio said Tuesday in an emailed statement.

Rio is the first top diversified miner to add lithium output to its portfolio and comes ahead of a looming decision on development of its mine project in Serbia that analysts estimate could account for about 5% of world demand. Demand for lithium will advance about eight-fold to 2030 as EV adoption increases and the battery sector expands, BloombergNEF said in a July report.

“If the trials continue to prove successful, this has the potential to become America’s largest domestic producer of battery-grade lithium -- all without the need for further mining,” Bold Baatar, chief executive officer of Rio’s energy and minerals division, said in the statement. Currently the only supplier in the U.S. is Albemarle Corp.’s Silver Peak operation in Nevada, according to the U.S. Geological Survey.

Rio, the world’s No. 2 miner, has held discussions on the EV sector with key companies in the supply chain and executives have visited China’s battery producer Contemporary Amperex Technology Co. Ltd. and electric automaker Tesla Inc., according to people familiar with the producer’s plans, who spoke on condition of anonymity as details of the talks are private. Tesla and CATL didn’t immediately respond to requests for comment.

A pilot plant being assembled at Boron -- about 100 miles northeast of Los Angeles -- under a $10 million first phase will produce about 10 metric tons a year of lithium carbonate equivalent by chemically processing material from the pile of decades-old mining waste.

Boron is part of a unit in California’s Death Valley that’s produced borates, materials used in laundry soap to components for nuclear reactors, since 1872. There’s at least 80 minerals to be found in material from the site, and staff had initially been combing the waste for gold and other elements when they discovered lithium, according to Rio.

Rio will next consider a $50 million investment to build an industrial-scale lithium plant with capacity for 5,000 tons a year that could begin making sales into the battery market. That volume would be sufficient for batteries needed in about 15,000 Tesla Model S cars, the company said.

While Rio’s competitors are also gearing up for forecast rising battery demand, their focus is on other commodities. Glencore Plc is aiming to add copper, nickel and cobalt output, while BHP Group is developing specialist nickel and battery cathode products and sees lithium as a less attractive option, Chief Financial Officer Peter Beaven said in May.

Lithium prices have sunk since mid-2018, ending a three-year surge, as new operations have added supply and amid some signs of demand weakness. There’s probably currently enough capacity to supply the global market until the mid-2020s, according to BNEF.

Rio previously weighed an offer for a stake in Soc. Quimica & Minera de Chile SA, one of the world’s top lithium producers, before deciding last year not to proceed.

Separately, Rio has signed an agreement to enter the rare earths supply chain with the sale of monazite, a raw material that contains the critical elements, the company said. The material is part of the waste stream at Rio’s mineral sands operation in Madagascar.

President Donald Trump has flagged concerns over the global supply of rare earths and a suite of other so-called critical minerals amid worries China, the dominant supplier of many of the materials, could restrict exports.

Rio is also using a $3 million Defense Logistics Agency grant to boost recovery of rhenium, needed for jet-fighter engines, at a copper operation in Utah. It’s also working on a project to boost U.S. supply of indium, used in touch screens and solar panels.

To contact the reporter on this story: David Stringer in Melbourne at dstringer3@bloomberg.net

To contact the editors responsible for this story: Alexander Kwiatkowski at akwiatkowsk2@bloomberg.net, ;Edward Johnson at ejohnson28@bloomberg.net, Keith Gosman