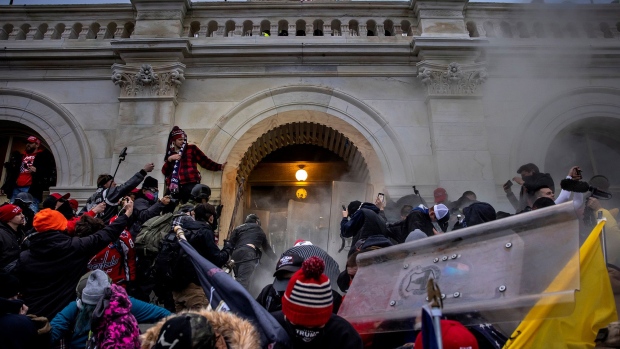 (Bloomberg) -- Congressional Democrats and Republicans are haggling over how many seats each party will get on a Sept. 11-style commission that House Speaker Nancy Pelosi has proposed to investigate the security lapses and other details of the Jan. 6 attack on the Capitol.

Republicans have objected to a Democratic proposals for 11-seat panel that would give seven seats to Democratic appointees -- including three from President Joe Biden -- and four to Republicans.

Pelosi last week began circulating to party leaders and others in the House and Senate a draft of legislation put together by the House Administration Committee to create the commission.

A senior Democratic official familiar with the draft said it would have the top House and Senate leaders -- Pelosi and House Minority Leader Kevin McCarthy, as well as Senate Majority Leader Chuck Schumer and Senate GOP leader Mitch McConnell -- each pick two members for the commission. Biden would pick two other members and the chair.

Under the plan, the commission would be scheduled to produce a final report by the end of 2021, and would then end 60 days after issuing that report.

Republicans have countered the proposal by seeking to have the commission’s seats evenly divided by party, according to a GOP official.

Pelosi has said the panel would be modeled on the bipartisan commission that probed the origins of the 2001 terrorist attacks on the U.S. and the security failings that preceded it.

While Republicans have joined calls for an independent panel, some of them have said the commission should focus on the actions of congressional leadership, including Pelosi.