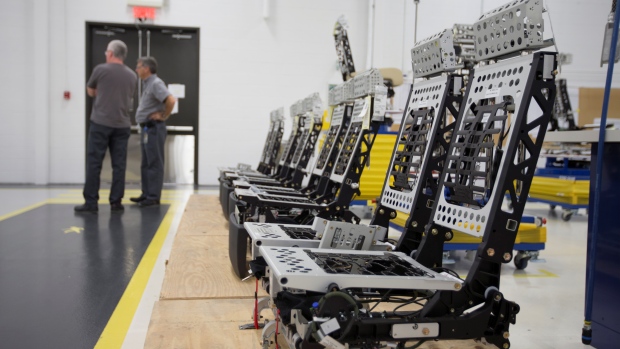 OTTAWA - Canadian economic growth slowed to 1.7 per cent in the third quarter, coming off a hot first half of the year as exports tumbled and businesses pulled back on investment, data from Statistics Canada showed on Friday.

The 1.7 percent, an annualized number, was slightly higher than the 1.6 per cent forecast by economists, while the second quarter rate was downwardly revised to 4.3 per cent from the previously reported 4.5 per cent.

"It’s official, Canada’s economy has cooled from the rip-roaring pace seen in the year to mid-2017," Reitzes wrote in a note to clients.

For the month of September, the economy grew 0.2 per cent, topping expectations and suggesting modest momentum heading into the fourth quarter.

Exports were the main drag on the economy in the third quarter, falling by 10.2 per cent on an annualized basis as shipments of vehicles and parts fell amid work stoppages and changes to certain models sent to the U.S. market.

Business investment in non-residential structures, machinery and equipment grew by 3.7 per cent, slowing substantially from the second quarter. The Bank of Canada has said uncertainty about North American trade policy is likely dampening business confidence.