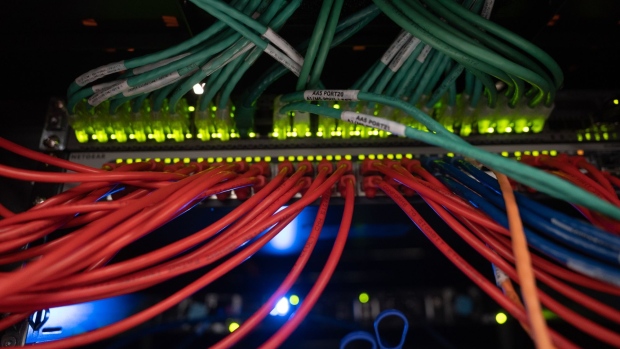 Ethernet cables in a supercomputer at the San Diego Supercomputer Center at the University of California San Diego (UCSD) in San Diego, California, U.S., on Monday, March 1, 2021. MIT researchers are using the 'Comet' supercomputer to develop an artificial intelligence (AI) approach to detect electron correlation, which is vital but expensive to calculate in quantum chemistry. Photographer: Bing Guan/Bloomberg , Bloomberg

(Bloomberg) -- Ripple Labs Inc. fended off an effort by a U.K. investment firm to redeem its equity in the blockchain company in the wake of a U.S. Securities and Exchange Commission lawsuit alleging that Ripple’s XRP token is an unregistered security.

A Delaware Chancery Court judge on Friday rejected a request by Tetragon Financial Group Ltd. for an order requiring Ripple to redeem Series C preferred stock held by Tetragon and to block Ripple from using any cash or other liquid assets until the payment is made.

Ripple argued that there’s been no determination that XRP is an unregistered security. The judge agreed that until the SEC case is resolved, XRP’s status remains an open question.

“The SEC still has to try to prove their case in court, which we do not believe they will be able to do,” Ripple said in a statement. “As our lawyers have said publicly, the SEC is ‘dead wrong.’”